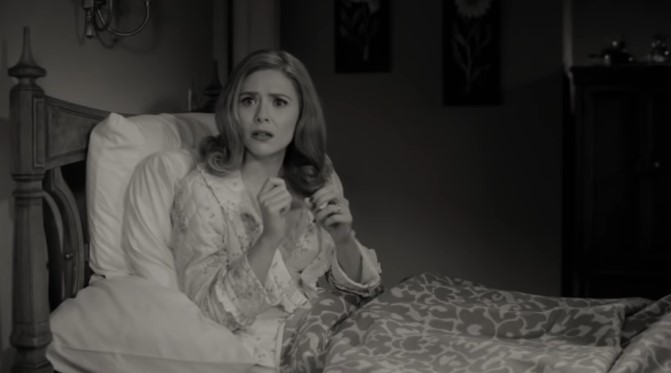 Next week will see the premiere of WandaVision on Disney+, and though we’ve been getting a lot of new promos and teaser, Jimmy Kimmel Live has actually given us a clip that looks like the opening scene of the show.

With the show allegedly being an ode to sitcoms old and new, Olsen had come out to say that the clip comes from the ‘Bewitched’ episode of the series. Of course, there are also other shows that influence the period, with Kimmel saying that the beds are reminiscent of the Dick Van Dyke Show.

Interestingly enough, if you keep the clip going, Kimmel actually points out some very interesting Easter Eggs like Vision’s tie as well as the wine bottle from the trailer hinting at a House of Misery or House of M. While Olsen couldn’t confirm or deny anything, they’re actually some pretty keen observations on Kimmel’s part; no doubt some people online have found these when the teasers first came out, but this is probably the first time they’ve really taken the spotlight.

After a whole 2020 of no MCU, Marvel Studios is set to launch Phase 4 with WandaVision this month. While I’m not expecting any Infinity War-level build-ups, it’s going to be interesting to see how the MCU will branch out moving forward. Marvel is going to have a lot of new characters incoming, and hopefully there’s enough time to develop some stories without everything feeling too convoluted.