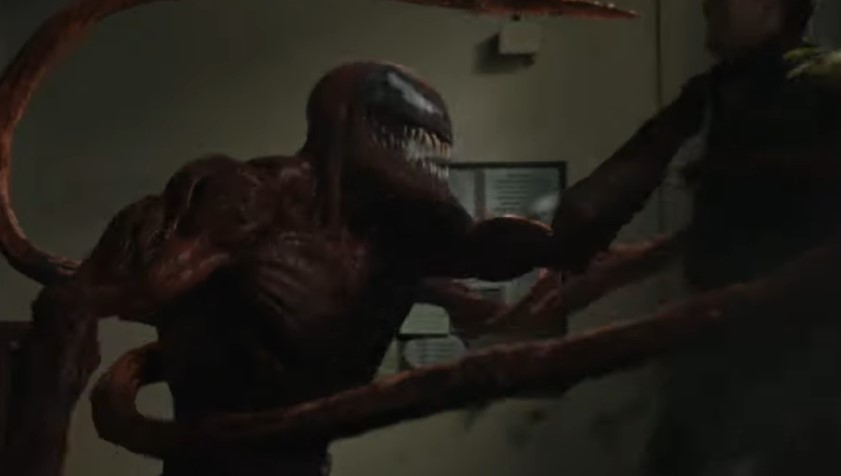 While fans online have been clamoring for Sony to release the first teaser for Spider-Man: No Way Home, the studio still has to market their next Spider-Verse film, Venom: Let There Be Carnage. We just got a new trailer, and boy does it lean in on the campiness of the first film.

Watch the trailer for Let There Be Carnage down here:

While we get to see some more Eddie/Venom shenanigans, we also get a better look at Woody Harrelson’s Cletus Kasady/Carnage. Though Venom acts kind of like a suit and refers to itself as a “we”, Carnage has a different bond with Kasady and refers to itself in the first person. In the teaser, you can see that Kletus’ body just morphs into Carnage, and has a wilder shape-shifting ability than Venom. At some point, it kind of looks like Kletus’ body morphed inside-out, harkening to the body horror of John Carpenter’s The Thing.

One other symbiote in the trailer is Scream, and while we get to see her use her powers, we don’t really have a look at her full-on form. With the level of detail that went into bringing Carnage to life, I’m interested to see how Scream will look, especially with that wild, big 80s hair.

Though Venom was a critical bomb, it looks like the film is doubling down on the camp and violence. Hopefully it doesn’t get too silly that a crossover with Tom Holland’s Spider-Man wouldn’t make sense.

Catch Venom: Let There Be Carnage when it releases on Sept. 15.