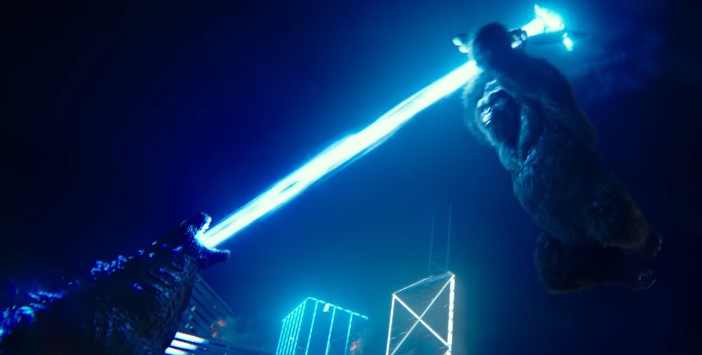 Since Godzilla launched in 2014, we’ve been treated to follow-ups Kong: Skull Island and Godzilla: King of the Monsters. Now Legendary is set to end their Kaiju franchise with Godzilla vs. Kong, and we have an all-new trailer.

Check out the trailer for Godzilla vs Kong down here:

Legends collide in “Godzilla vs. Kong” as these mythic adversaries meet in a spectacular battle for the ages, with the fate of the world hanging in the balance.  Kong and his protectors undertake a perilous journey to find his true home, and with them is Jia, a young orphaned girl with whom he has formed a unique and powerful bond.  But they unexpectedly find themselves in the path of an enraged Godzilla, cutting a swath of destruction across the globe.  The epic clash between the two titans—instigated by unseen forces—is only the beginning of the mystery that lies deep within the core of the Earth.

People who’ve watched Skull Island will notice that Kong is significantly larger in this film. It had been teased that he was still growing in his debut film, so here we could actually see him in full form. Though he doesn’t have atomic breath like Godzilla, Kong does have the ability to wield gigantic tools to his advantage.

While the movie does have returning cast members like Millie Bobby Brown and Kyle Chandler, we do have some new cast members in the form of Rebecca Hall, Alexander Skarsgard, Bryan Tyree Henry, and Julian Dennison. We don’t know how exactly they’ll factor into the story, but it’s very possible that specific groups will be siding on either Kong or Godzilla.

Legendary’s Monster franchise hasn’t received the best critical reception, but they do make for some cinematic spectacle, and I think that’s all that matters.

Catch Godzilla vs. Kong when it hits theaters and HBO Max on March 26.