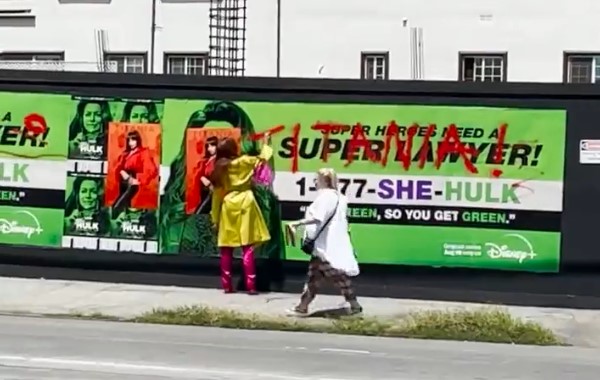 The first episode of She-Hulk had Jameela Jamil’s Titania clashing with Jen Walters, and though she may not be a main adversary, it seems that she’s going to be a recurring nuisance in the show.

What’s fun is, in some guerrilla marketing move, Titania has been spotted in public vandalizing an ad for She-Hulk. Check this out:

We don’t really know what Titania’s beef is with She-Hulk, but showrunner Jessica Gao does say that the character is going to be frequently finding ways to try and get to Jen. Talking to Collider, Gao explains:

We’ll start to see Titania a lot more. But with the first few episodes, we just wanted to seed her in there because in the comics she was this gnat that was always buzzing around She-Hulk. It was never like, “Oh, Titania’s gonna destroy the city.” It was always, “Titania has come up with yet another way to come after Jen.” That’s really what we’ve tried to preserve in the show.

think the character concept is fantastic, and somehow someone has turned herself into She-Hulk’s archnemesis even if Jen didn’t want to be a superhero in the first place. It’s going to be fun to watch Jamil causing havoc for She-Hulk in the show, and I wouldn’t mind if she found herself in some other series either.

With Gao having worked on Rick and Morty, we can see that She-Hulk does have that comedic tone that wasn’t present in former Marvel/Disney+ properties. I really hope they lean in on the lawyer-meets-superhero show concept because the franchise really needed something genuinely different.