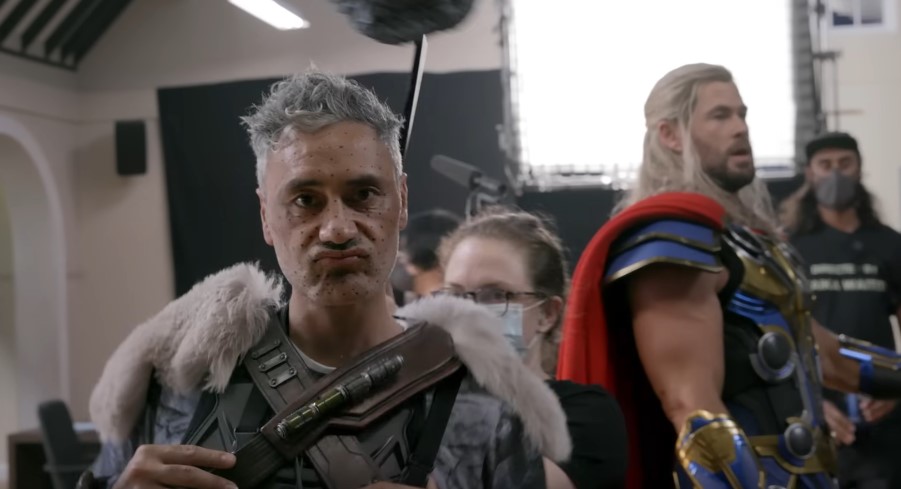 Marvel had took a chance with Taika Waititi with Thor: Ragnarok, but now they’re allowing him even more creative freedom for the upcoming sequel Thor: Love and Thunder. The film is set to come out later this week, and we have a new featurette taking a good look at the man behind the helm of Thor’s next adventure.

Watch the new Love and Thunder clip down here:

Hemsworth said about Waititi, “Taika is like a big kid, sort of genius child. There’s this imagination that’s second to none.” Natalie Portman, who is returning to play the Jane Foster’s version of the God of Thunder, says, “Taika is really good at refelecting the way life can be dark and comedic all at once.”

While Thor: Ragnarok was already pretty goofy by MCU standards, Waititi does say that he’s doubling down on the tone of Love and Thunder, and we can expect things to be more colourful and vibrant. Being a fan of Waititi’s more ‘serious’ work though, I am hoping that Love and Thunder manages to take the character arcs a lot more seriously, especially with Jane. Though the previews have only shown her getting her powers, comic readers will know that there’s actually a pretty tragic reason why she has to become the new wielder of Mjolnir.

Thor embarks on a journey unlike anything he’s ever faced — a quest for inner peace. However, his retirement gets interrupted by Gorr the God Butcher, a galactic killer who seeks the extinction of the gods. To combat the threat, Thor enlists the help of King Valkyrie, Korg and ex-girlfriend Jane Foster, who — to his surprise — inexplicably wields his magical hammer. Together, they set out on a harrowing cosmic adventure to uncover the mystery of the God Butcher’s vengeance.

Thor: Love and Thunder flies into theaters on July 8.