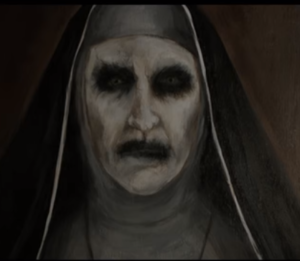 The Conjuring spin-off, The Nun, would be debuting this weekend. According to industry experts, projections say that the film will make it big at the box office.

Despite competing with the uber successful Crazy Rich Asians, Box Office Pro as reported by Screen Rant reports that The Nun should earn $45 million in the next three days. Horror movies generally perform well with audiences.

With the premiere just a wink of an eye away, more and more details about the spin-off has been revealed by the cast and crew of the movie themselves. Recently, Screen Rant spoke with the movie’s director, Corin Hardy, to explore what it took for him and the cast to create the movie.

In the interview, Hardy revealed that he was interested in the character of the nun in The Conjuring movies long before fans thought of it. While he didn’t know that he would have the opportunity to work on the spin-off, he knew that the particular character was worthy of exploration:

“When I saw The Conjuring 2, I mean, I’m a devoted horror fan so I’ve seen all of James’s movies. And I’d seen The Conjuring 2 at the cinema when it came out. I wasn’t thinking, I’m going to make that film. That was a few years ago. But I was definitely aware of the demon nun sort of being quite prominent. Especially, she wasn’t in it for very long. But she kind of stole the show in a sense. So, when I got the script, I knew the character. I was curious to see where it would go and was excited to see where it went.”

With his interest in all thing horror and macabre, Hardy also shared a creepy experience that happened during the filming of The Nun in Romania. According to the director, the cast was shooting in a tunnel that was part of a real Romanian fortress. He saw a couple of sound guys at the location and said hi to them. They had a good take in the location. As he was rejoicing, he noticed that the sound guys he said hi to were no longer there. The catch is there is only one door:

“I was based inside a room off the corridor in the darkness, a sealed room. As I went into the room, I saw a couple of guys I thought was sound guys, and it was very dark, low light. I said hello to them. And then I proceeded to watch the sequence that we were shooting. Trying quite hard to get a technical thing to work with a camera rotation. And that took a few takes and it was quite frustrating. And then when I finally got the shot I was quite elated, punched the air. And I turned around to see if these two guys had seen the take and there was no one there. No one sitting in the room. No way in our out. And it was a moment which I can only explain genuinely as being some Romanian ghosts. I mean, it was a fortress.”