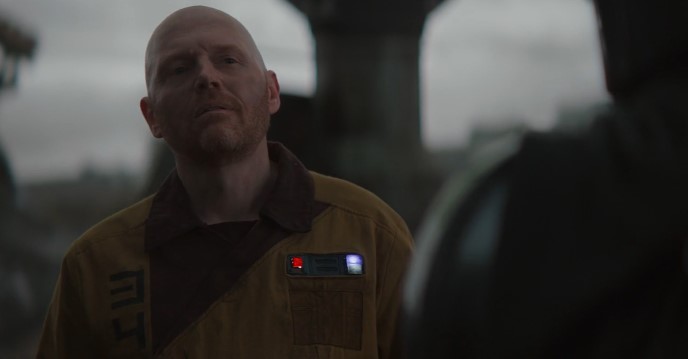 While Bill Burr may have had a small role as Mayfeld in the first season of The Mandalorian, he comes back to steal the show in the second season’s episode, The Believer. With Burr being infamous for his Boston accent, a lot of people have been making fun of  Mayfeld supposedly coming from ‘Space Boston’. With some fans thinking this is a huge goof on Burr’s part, Burr would beg to differ.

Talking to The Tonight Show Starring Jimmy Fallon, Burr was asked about his Boston accent in The Mandalorian, to which he replies:

“What about English? Isn’t that a little weird when you get to a galaxy far, far away? What about the fact that Han Solo is talking to a bigfoot? He’s speaking bigfoot, Han Solo is speaking English; they never break character … and that was all fine. How about C-3PO with that English accent?”

For now, it looks like Mayfeld’s entanglements with Mando are completely done, but a lot of people are hoping that he somehow finds his way back to the show; maybe in the upcoming spinoff series Rangers of the New Republic. With Burr pretty much keeping busy with his podcast and stand-up tours, I don’t expect him to be a series regular in the future though.

For now, 2021 is gearing up for the release of The Book of Boba Fett later in the year. We should expect the third season of The Mandalorian to come out in 2022. In the meantime, check out the complete second season now on Disney+.