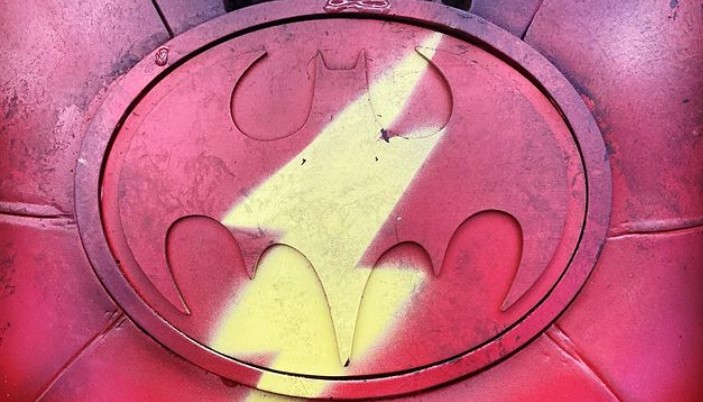 With the Flash solo movie said to have two different versions of Barry Allen, some shots have revealed that one Flash will be making their own suit out of a Batsuit that belongs to Michael Keaton’s Bruce Wayne. We don’t have an official look at it yet, but we do have some promotional material that could give us a look at this Batman/Flash costume.

While we’ve seen the new suit with the cowl, this is the first time we’ve seen most of the makeshift supersuit. The thunderbolt sprayed over the bat symbol was teased years before, but now we get to see that the ‘ears’ have been cut off the cowl, most of the suit is painted red, and some traffic stickers have been placed in some parts of the suit. I’m guessing the yellow bits on his head are supposed to headphones.

From Spider-Man’s homemade suit in Homecoming to Iron Man’s first suit that he built in the cave, I’m honestly a sucker for DIY superhero outfits. I love how they were able to make use of a Burton batsuit, and they gave it its own original flair that shows off the personality of the Flash.

Though Ezra Miller has been making some problematic headlines over the past few months, one thing remains constant with the test screenings, and it’s that audiences have had very positive reactions to the movie. Will The Flash eventually mark a new era for the DCEU, or will it go the way of Sony’s Morbius?

We’ll just have to wait and see.