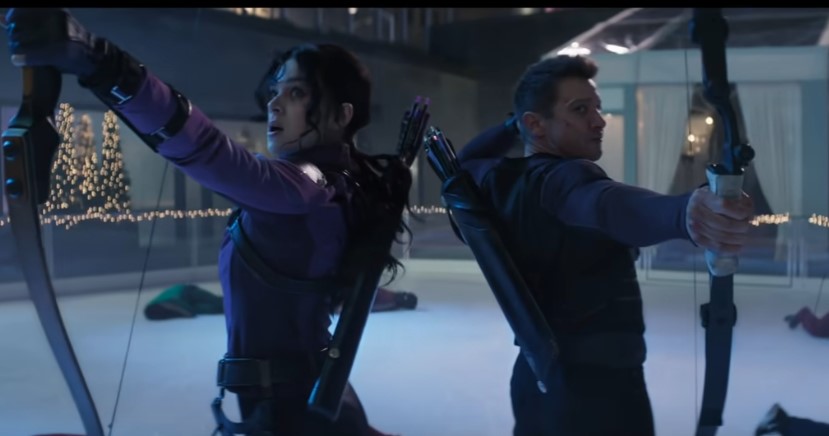 Though he didn’t get his own solo movie, Jeremy Renner’s Hawkeye is going to be in the spotlight with his upcoming series on Disney+.  We just got the first trailer, and it promises some holiday fun.

Disney+ and Marvel Studios invite you on an unexpected holiday getaway, unwrapping a brand-new teaser trailer and poster today for “Hawkeye,” a new series set in post-blip New York City. Former Avenger Clint Barton has a seemingly simple mission: get back to his family for Christmas. Possible? Maybe with the help of Kate Bishop, a 22-year-old archer with dreams of becoming a Super Hero. The two are forced to work together when a presence from Barton’s past threatens to derail far more than the festive spirit.

First off, the trailer pretty much confirms the holiday setting—which should be perfect when the series comes out later in the year. Another thing confirmed is the relationship between Barton and Bishop; while some thought that she would be some kind of secret protégé, the series reveals that Barton becomes some kind of reluctant mentor to a Hawkeye fan.

With WandaVision, The Falcon and the Winter Soldier, and Loki on the more serious side of things, I’m actually kind of refreshed to see Hawkeye embrace the action-comedy genre. While I’m sure there will be some room for some heavy moments, this trailer kind of promises that Marvel will be trying to diversify their entries moving forward.

Hawkeye premieres on Disney+ on Nov. 24.