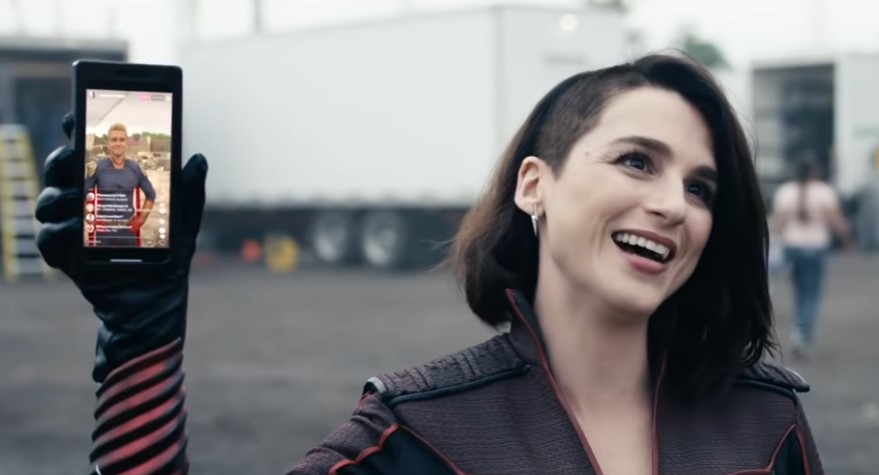 Homelander has pretty much been the ‘unstoppable force’ in The Boys, but he’s set to meet his match in the form of Stormfront (Aya Cash) in the second season. What’s great is, we have a new clip of Stormfront on the show, and you can already see her trying to cause havoc for the Seven and their PR team.

In the comics, Stormfront was actually a guy who was leading his own super group, Payback. He has also been described as some kind of “Nazi version of Superman.” We don’t know exactly how the show’s Stormfront will play out, but I already like how Cash’s character is putting everyone off their balance.

When her character was first revealed a few months ago, Cash told EW about Stormfront:

“I think she’s here to blow up Vought… She’s here to try to get Vought back to the original idea behind creating superheroes… And she can be quite the feminist. There’s a lot of, I wouldn’t say misdirect, but she also is a very empowered woman.”

Though we know Stormfront is there to clash with the Seven, we still have no idea what she means to our main Boys. Personally I hope she’s on the more sincere side, but I think this show isn’t going to be all about that.

The Boys is an irreverent take on what happens when superheroes, who are as popular as celebrities, as influential as politicians and as revered as Gods, abuse their superpowers rather than use them for good. It’s the powerless against the super powerful as The Boys embark on a heroic quest to expose the truth about “The Seven”, and their formidable Vought backing.