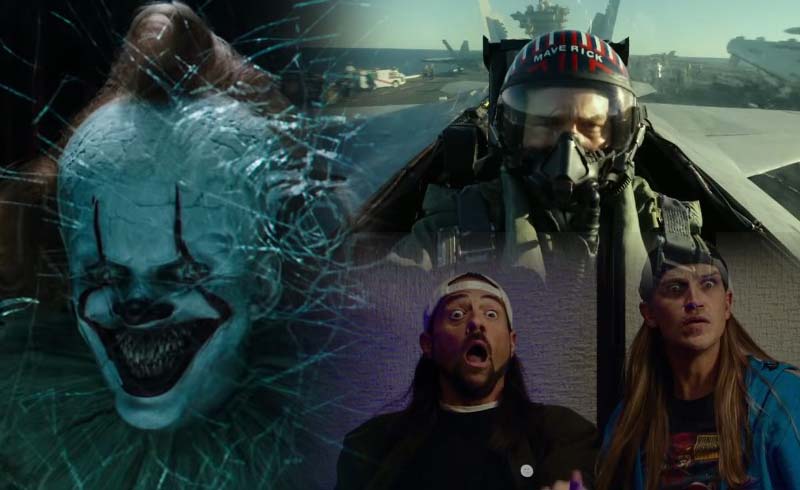 The San Diego Comic-Con has finally kicked off for the year, and with it we get several huge reveals for some upcoming films and TV series. Check out the great trailers that came out on this day alone:

Because every 27 years evil revisits the town of Derry, Maine, “It Chapter Two” brings the characters—who’ve long since gone their separate ways—back together as adults, nearly three decades after the events of the first film.

The stoner icons who first hit the screen 25 years ago in CLERKS are back! When Jay and Silent Bob discover that Hollywood is rebooting an old movie based on them, the clueless duo embark on another cross-country mission to stop it all over again!

Astronaut Roy McBride (Brad Pitt) travels to the outer edges of the solar system to find his missing father and unravel a mystery that threatens the survival of our planet. His journey will uncover secrets that challenge the nature of human existence and our place in the cosmos.

No official description has been given for this film yet, but it’s said  that Cruise’s Pete Mitchell is now a flight instructor, and he’ll be in charge of handling the new recruits of his division, them being Goose’s son (Miles Teller), and the first woman pilot (Monica Barbaro). Val Kilmer is also expected to make a return.

His Dark Materials stars Dafne Keen, James McAvoy, Ruth Wilson and Lin-Manuel Miranda. Adapting Philip Pullman’s award-winning trilogy of the same name, which is considered a modern masterpiece of imaginative fiction, the first season follows Lyra, a seemingly ordinary but brave young woman from another world. Her search for a kidnapped friend uncovers a sinister plot involving stolen children, and becomes a quest to understand a mysterious phenomenon called Dust. As she journeys through the worlds, including our own, Lyra meets Will, a determined and courageous boy. Together, they encounter extraordinary beings and dangerous secrets, with the fate of both the living — and the dead — in their hands.

SDCC 2019 is kicking off to a good start, and I can only imagine how crazy tomorrow will be, what with the Marvel Studios panel as well as Hall H presentations for Star Trek, WB, and many more. I was just kind of hoping that there would be more Star Wars reveals, a few trailers maybe, but I guess Lucasfilm is holding all of that off until the D23 Expo this August.