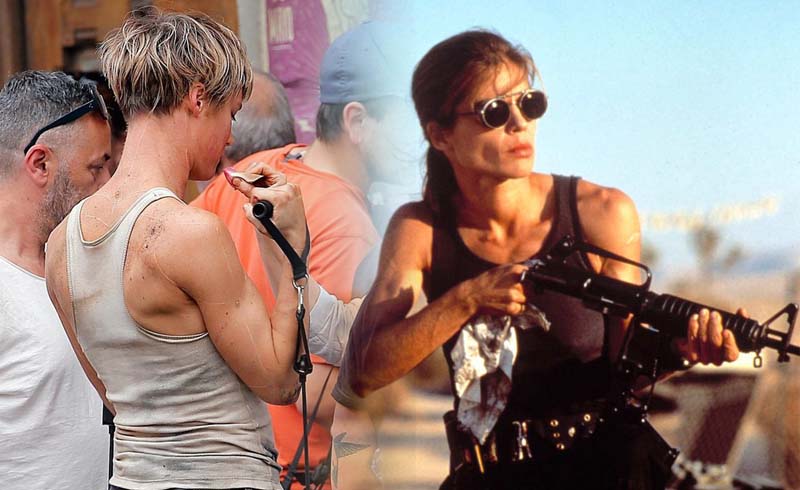 James Cameron may be busy working on his Avatar sequels for now. But now he’s also decided to produce a reboot/sequel for the Terminator franchise with Deadpool director Tim Miller at the helm. Now, new Terminator 6 images have surfaced of original star Linda Hamilton, as well as the new ‘face’ of the franchise MacKenzie Davis.

The pictures of Hamilton are courtesy of TheTerminatorFans, and Davis’ set photos come from JustJared.

Hamilton has not been in the franchise since Terminator 2, but a lot of fans are rejoicing that she is being brought back as Sarah Connor for this movie. Besides her, franchise veteran Arnold Schwarzenegger is also coming back, and he’ll be playing an older version of the T-800, much like in Genisys.

I will be watching this film for the plot & no other reason whatsoever. None. *whispers* look at her arms pic.twitter.com/Wcqt7FV9Qp

Photos of Mackenzie Davis on the set of the Terminator film is a lot. I need a moment. pic.twitter.com/xUNQozwJLz

As for Davis, it looks like she has buffed up significantly for this film. With Terminator being the source of one of the most kickass women in cinema—Sarah Connor—it would only seem right that the film would introduce us to another female badass. I don’t know what the lines on her body mean though. My guess is that either she’s an experimental cyborg, or that she is also a terminator a la Summer Glau in The Sarah Connor Chronicles.