Hailee Steinfeld shared the first image of the ‘Transformers‘ prequel ‘Bumblebee‘ on Twitter, which features her character, Charlie, standing next to a VW Beetle, which we know is one of the earliest forms of one of our fave Autobots Bumblebee! 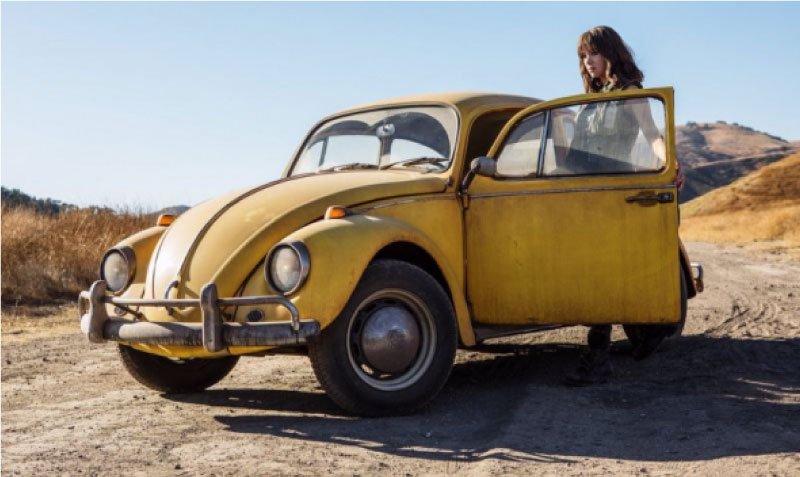 Granted he doesn’t look great in this photo and is far from the Bumblebee we saw in the Michael Bay’s ‘Transformers‘ movies, but ‘Bumblebee‘ will find the mechanoid in the junkyard.

In a recent interview with IGN, Steinfeld said that ‘Bumblebee’ will continue the ‘Transformers‘ legacy, it will set itself apart from the movies:

“It’s very character-driven and storyline-driven, which is good. I think will be interesting to see it play out because you still get the action and the Transformers themselves. There’s a whole lot in it for the Transformers fans that I think they’ll love, but it’s definitely about storyline and characters.”

On the other hand, Travis Knight, who is set directing, said in an interview with Empire that his plan for ‘Bumblebee‘ is to focus on the “tiny corner of the canvas” of this massive franchise.

“Everything I’ve tried to do at Laika, searching for an artful blend of darkness and light, intensity and warmth, humour and heart, I wanted to bring to the Transformers franchise.”

‘Bumblebee‘ will hit theaters Dec. 21, 2018 and will show the story of Bumblebee the Autobot in 1987, seeking refuge in a junkyard in a California beach town. Charlie, who is your typical lost teenager trying to find her place in the world will discover the broken Bumblebee and revive him.

We’re hoping this ends up being good since we were never fans of the other ‘Transformers‘ movie, but grew up watching the animated version. What do you think? Do you think ‘Bumblebee’ will prove to be a box office success?