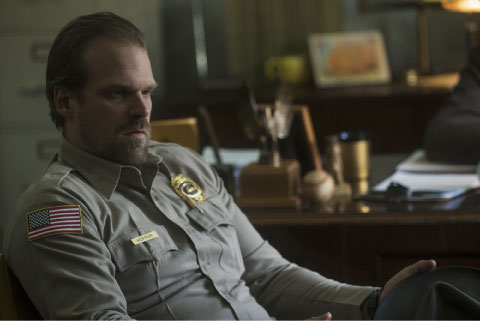 Season 2 of “Stranger Things” may have aired just a couple of months ago, but that doesn’t mean it’s too early for some season 3 speculation.

In an interview with Variety, David Harbour said he would like to dive deeper into Chief Hopper’s past.

“There’s a lot of story we can get into around Hopper’s time as a cop in New York, Hopper’s time in Vietnam,” he explained. “I would love to see more of that, but we have a ton of great characters, so I don’t know how much they’ll be able to do.”

He was also asked about the “Stairwell Theory“. In which he said;

“I’m not supposed to comment on that,” the actor responded with a laugh. “I think [creators Matt and Ross Duffer] have a plan. There’s a lot of things coming, but I don’t know too much about that.”

READ “What We Know About Stranger Things Season 3…So Far”

Harbour also commented that he would also like to see a Hopper-Steve story arc in the future after witnessed the unexpected friendship between Dustin (Gaten Matarazzo) and Steve (Joe Keery).

But after that Harbour kept a closed lip on season 3 of Stranger things, but did hint that the next release date would most likely be January or February of 2019, which sucks we were kind of hoping it would have a September or October 2018 release, but in the meantime expect “Stranger Things” season 3 to drop sometimes in 2018 or 2019 on Netflix. Production will begin in April.

Do you have any theories or team-ups you’d like to see in Season 3? If so leave us a comment below.