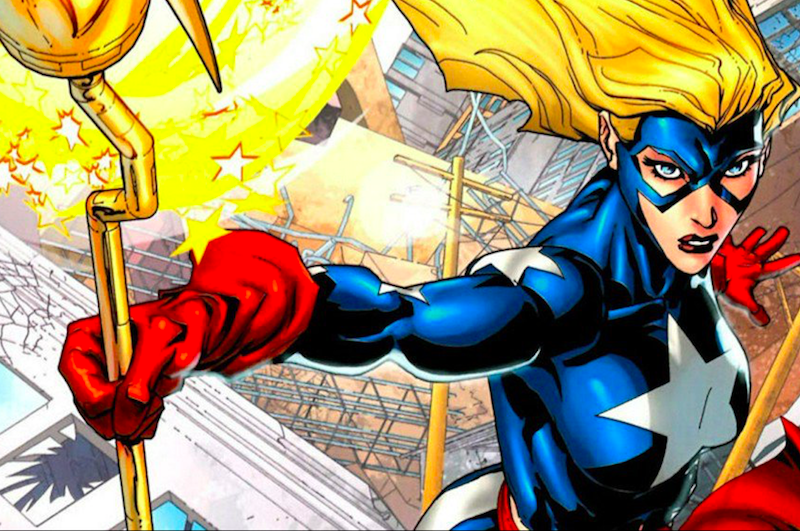 Legends of Tomorrow takes fans on a different ride through the time stream in Season 2. During the team’s ventures, we’ll meet the Justice Society of America and the Legion of Doom. Stargirl, played by the Power Rangers reboot’s Sarah Grey, also hops aboard the show this season.

In the TV spot below, we can glimpse of Grey costumed and in battle. It’s absurdly quick, but she’s there. You can spot her at the 20-second mark. If you’re playing close enough attention, you should see the Reverse Flash moments later.

DC’s #LegendsOfTomorrow play by their own rules when season 2 premieres Thursday, October 13 at 8/7c! pic.twitter.com/4j8DXIkwo0

Stargirl, created by Geoff Johns, first appeared in Stars and S.T.R.I.P.E. #0 in 1999. Courtney Whitmore, aka Stargirl, is a member of the Starman Legacy who wields a powerful staff. The Cosmic Staff allows users to manifest abilities such as flight, energy manipulation and object levitation. It also enables force field creation and much more.

For now, all that’s known about her Legends role is her being a member of the Justice Society. The show has only shot its first few episodes, though. It’s a safe assumption she’ll appear early in the season. Other JSA additions to Legends includes: Obsidian, Citizen Steel, Hourman, Dr. Mid-Nite, and Vixen.

“After the defeat of the immortal villain Vandal Savage and the corrupt Time Masters who colluded with him, a new threat emerges. Dr. Nate Heywood (Nick Zano), an unconventional and charming historian, is thrust into the action upon making a shocking discovery – the Legends are scattered throughout time.

“Nate must find a way to rescue season one’s beloved team of heroes and rogues, including billionaire inventor Ray Palmer (Brandon Routh), who has created an exo-suit with the power to shrink him to miniscule size, as the Atom; Sara Lance (Caity Lotz), the White Canary, a trained assassin; Professor Martin Stein (Victor Garber) and Jefferson “Jax” Jackson (Franz Drameh), who together form the meta-human Firestorm; and Mick Rory (Dominic Purcell), aka Heat Wave, a career criminal.

“When the Legends encounter the J.S.A (the Justice Society of America, the precursor to DC’s Justice League) in the 1940s, Amaya Jiwe (Maisie Richardson-Sellers), aka Vixen, joins the team. While the team reunites, a mystery looms – the fate of former captain Rip Hunter (Arthur Darvill).

“Once reunited, the Legends continue their new mission to protect the timeline from temporal aberrations – unusual changes to history that spawn potentially catastrophic consequences. When Nate, the grandson of J.S.A. member Commander Steel, unexpectedly finds himself with powers, he must overcome his own insecurities and find the hero within himself. Ultimately, the Legends will clash with foes both past and present, to save the world from a mysterious new threat.”