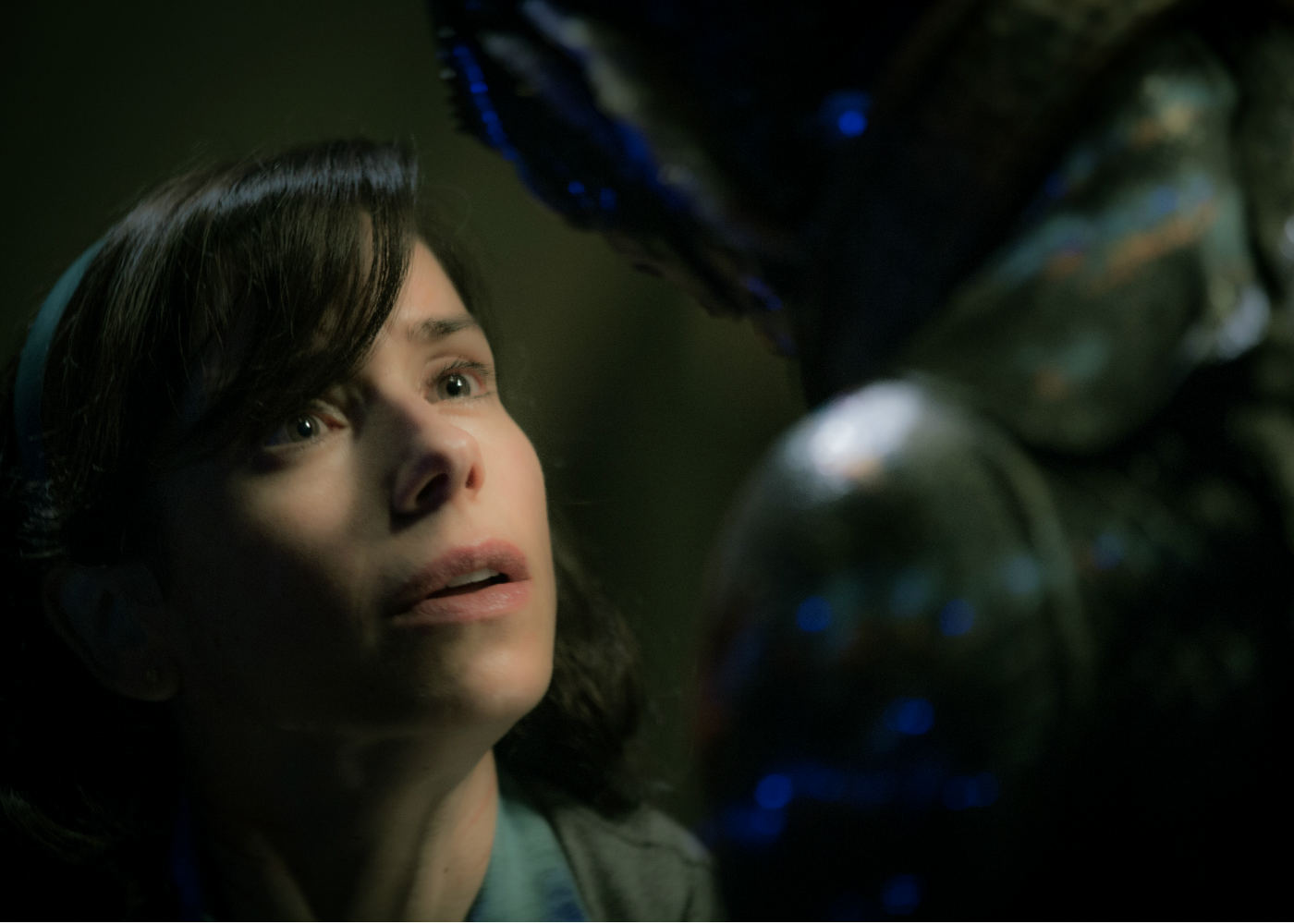 There has always been something inherently beautiful about the work of Guillermo Del Toro. It can be found in the horror of Cronos, the costumes of Crimson Peak, even the dying of a felled beast in Hellboy II: The Golden Army. So it makes sense that he would eventually cast his spell over a romantic movie. It’s also wonderfully logical that it just happens to take place between a mute woman and an aquatic man. Prepare to fall gilled head over heels for The Shape of Water.

In a Del Toro deco scientific lab, all oversized pipes and algae stained walls, mute Eliza Esposito (Sally Hawkins – Godzilla) can be found cleaning the equipment designed to test the latest potential Cold War weaponry, whilst attentively listening to the travails of her workmate, Zelda (Octavia Spencer – Hidden Figures). When a new arrival is escorted in, encased in a water tank, led by intimidating security detail, Strickland (Michael Shannon), Eliza forms an unspoken bond with a kindred spirit, one who’s also trapped in a world in which they don’t fit, looking for a way out.

It’s fitting that Del Toro has created visuals to drown in. From the opening credits, an underwater dream of green hues that lulls you into a submissive state from which the story can wash over you, to the brief scenes of consummation, with Hawkins and the aqua man (played by long-time collaborator Doug Jones) twirling in a whirlpool of passion, The Shape of Water is as stunning as you’d expect from a director whose own imagination is seared onto our own.

As well as being a film with passion driving its narrative core, one of the overriding themes is a love for classic cinema, there’s even a wonderful sequence in which the numerous films or TV shows that Eliza and her best friend (Richard Jenkins) tuck into of an evening, are riffed upon magnificently. It’s the kind of moment which feels natural in a film like this, as completely normal as a woman falling in love with a fish.

In that respect, The Shape of Water couldn’t be more timely. It’s about acceptance in an era when there’s racial discourse, sexual prejudice, and a fear of anyone different. The fact that a completely taboo relationship is accepted with wanton abandonment by the characters and audience is what makes Del Toro’s film soar.

In truth, the relationship between Eliza and fishface is probably the weakest part of the movie. You never really feel the weight of their union due to the little time they actually spend together before the meat of the movie kicks in. She gives him a few boiled eggs, plays a bit of music, signs a few phrases, and boom, they’re sympatico. The reason the romance works is simply down to the brilliance of Hawkins. Silent for most of the film, she does more with sign than most actors with reams of dialogue. There is a moment during which she has an argument with Jenkins, who’s also outstanding in a layered role, where the power of her language is more moving than it would be were she shouting. You root for this woman, who finds society’s definition of normal, within something so lovingly abnormal.  In a movie full to the brim with moments that enchant, Hawkins floats to the top.

Playing off against her in a role that could only be performed by him, Michael Shannon is so much more than pantomime as the politely offensive baton wielder, who takes great pleasure in torturing the object of Eliza’s affection. As with nearly all of the characters, they are delicately drawn, so we get a glimpse at his home life, where he flinches at the kisses received from his children, and covers his wife’s mouth during sex. He’s a complex specimen, and probably the real monster of the story.

If it doesn’t quite achieve the awe-inspiring complexity of Pan’s Labyrinth, then that’s because The Shape of Water revels in the simplicity of two people falling in love.

The Shape of Water is rich in themes and characters, and crafted with the kind of enchanting beauty that you’d expect from Guillermo Del Toro.