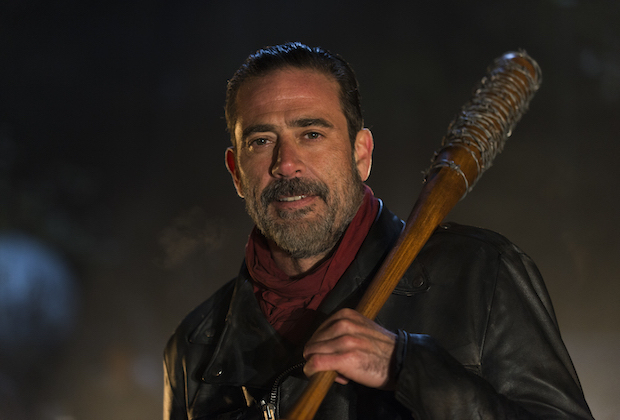 The first trailer for Season 7 of The Walking Dead has been revealed during the show’s panel at San Diego Comic-Con 2016. Once again Nerdist’s Chris Hardwick kicked-off the panel after moderating the Fear The Walking Dead panel minutes before, bringing on stage the show’s executive producers Scott M. Gimple, Gale Anne Hurd, Dave Alpert, Greg Nicotero and creator of TWD Robert Kirkman.

Hardwick revealed (via CBR) that Season 7 begins with an eight episode run and that AMC will be showing a preview in August to reveal new footage ahead of the show’s premiere.

For now, check out the trailer for Season 7 of The Walking Dead below:

Where we left off at the end of Season 6, pregnant Maggie had fallen seriously ill, leaving Rick to head to Hilltop with a small group to seek medical assistance. However, the Saviors blocked every route leading there, taunting them until they were surrounded by the gang in a forest. Rick’s group was then lined up like lambs to the slaughter, as the Saviors’ leader Negan introduced himself. Negan toyed with Rick’s posse and then stated he had to kill one of them for killing so many of his men. He randomly chose one member of the group and proceeded to beat that person with his baseball bat Lucille, all viewed from a first-person perspective. The identity of the unfortunate victim remains a mystery.

The season finale was met with much criticism, with fans arguing it was a cop-out cliffhanger. Critics too reacted negatively to the decision of hiding the identity of Negan’s victim. Scott M. Gimple and Robert Kirkman defended the finale, saying it was the end to that particular story, with Season 7 beginning anew shaped by the death of a particular character. But who is it?

The Walking Dead Season 7 is set to premiere October 23 on AMC.