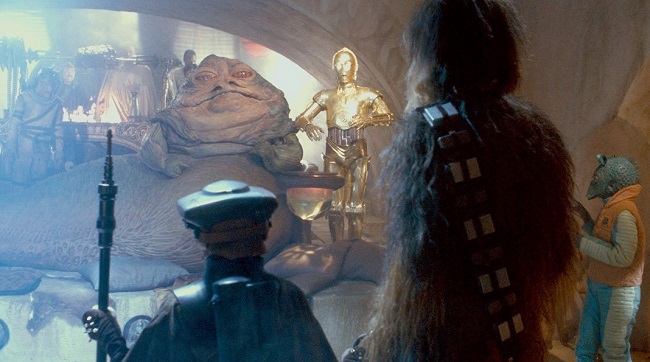 Solo: A Star Wars Story promises to show us the origin of Han Solo, from his friendship with Chewbacca to him acquiring the Millennium Falcon. Now rumor has it that it will also show the origin of his debt to infamous gangster Jabba the Hutt.

According to The Sun who apparently has an insider source:

“It’s a huge secret, but Jabba is returning to the Star Wars universe. Fans will learn why Han ended up owing him so much money.”

Some people guess that Han’s debt will have something to do with the missing front piece of the Millennium Falcon which has somewhat been confirmed to be a smaller ship. Based on Greedo’s lines about Han abandoning cargo, it’s likely that Han had the cargo in the pod, and he had to let it go at some point in the film.

An appearance from Jabba could mean a ton of different cameos. It could mean the appearance of fan-favorite Boba Fett who is rumored to be getting his own movie soon. I personally wanted to have Greedo in the film as well, just trying to track down Han and missing him by the last second.

This appearance from Jabba is just a rumor for now, but it’s very likely that we’ll be seeing him in the film. Fingers crossed.