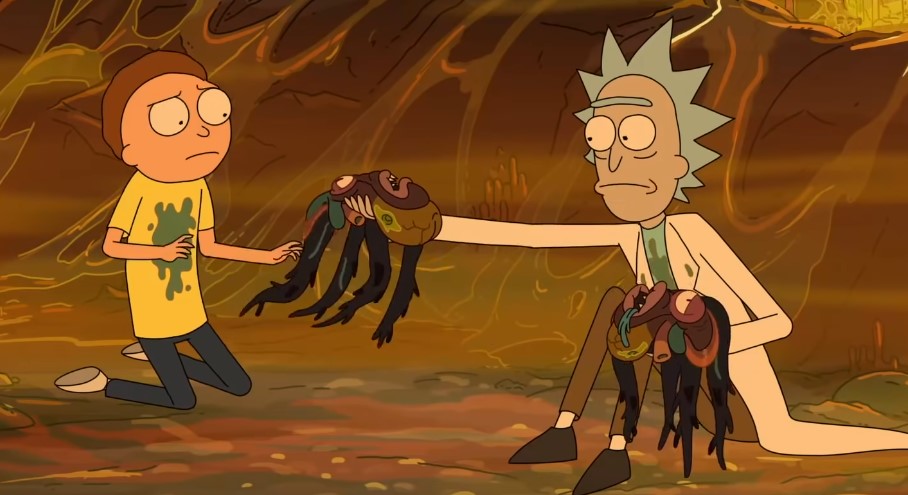 Adult Swim had cut the fourth season of Rick and Morty short by only releasing the first five episodes last year, but now we’re going to get the final half of the show, and after a recent trailer, we have the titles of the next five episodes.

In order, the episodes are titled Never Ricking Morty, Promortyus, The Vat of Acid Episode, Choldrick of Mort, and Star Mort Rickturn of the Jerri.

Like all the other episodes that have come before it, the next five titles are terrible puns of Rick and/or Morty fused with film titles or phrases. So far, the only film titles I think are parodied are Prometheus, Children of the Corn, and Star Wars: Return of the Jedi. I don’t know what the other titles are supposed to reference, but I think The Vat of Acid Episode is trying to reference Friends and the show’s method of titling (i.e., The One with…)

If we’re also going to look more into it, putting these titles next to the trailer kind of tell us how the final episodes will play out. We know there’s going to be a lightsaber fight with Summer and Tammy, and since the last episode is a Star Wars reference, then we can say that the scene involving Tammy’s return will be part of the finale.

Personally, I’m kind of getting irked at Rick’s character arc in which he’s become an immortal nihilist. I remember the earlier seasons where we actually have to be worried for Rick, but now the show has very much leaned in on his ‘real’ issues of loneliness and reluctance to connect. I mean, it’s some great character exploration, but it kind of makes the show lose its sense of fun.

Then again, that’s just my opinion.

Rick and Morty 4 is set to come back to Adult Swim on May 3.