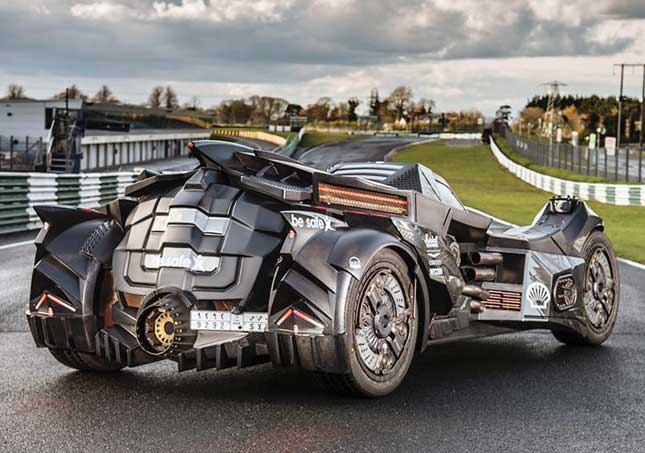 When Rocksteady revealed they would be incorporating the Batmobile into Batman: Arkham Knight, the internet went crazy. Seeing the gameplay was phenomenal, but controlling the Bat-Tank was hit or miss for many fans. The game was unfortunately burdened with excessive tank missions, which typically pulled the player out of the experience so well-grounded in the first two titles. The desire to skip tank missions is still unfilled, and will likely remain so, but no one would ever deny wanting to control this beautiful beast in the real world.

Saudi Arabia’s Team Galag is returning to the Gumball 3000 Rally with what they’ve dubbed the Batmobile 2.0, after their Nolan-inspired Batmobile suffered mechanical issues that forced it out of the rally in 2014.

Beneath its carbon-body sits a 5.2L V10 engine, running from a Lamborghini Gallardo. The exhaust at the back is the real deal, but don’t expect to see any flames coming out of it. The Batmobile’s canopy actually functions the way it does in the game and appears to open and close just as smoothly. Not to mention it sounds as phenomenal as it looks. Check out the video below to see it in action.

The Gumball 3000 is a 3,000 mile journey, which kicks off this Friday and will see its racers travel from Dublin, Ireland all the way to Bucharest, Romania. We’ll find out soon if this Batmobile was enough to lead its drivers to victory.

There are more images to ogle admirably in the gallery below.