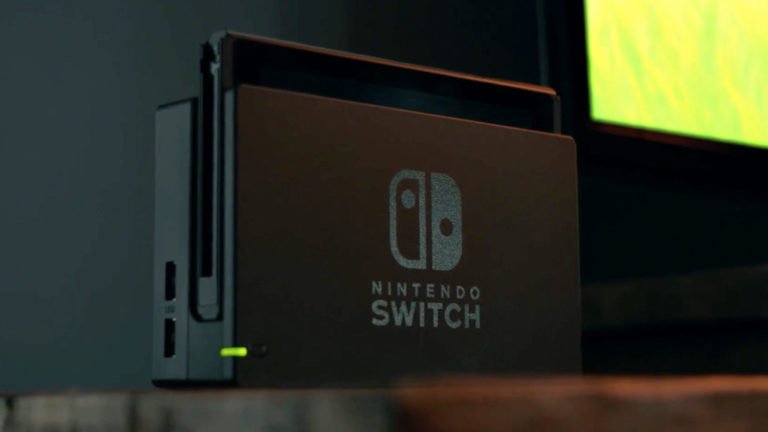 At the Nintendo Switch Presentation, the Big N finally unveiled the price and release date of their new hardware. It’s spring roll-out has been known for a while, but we now have an official day in March. The Nintendo Switch hits stores on March 3 in North America, Japan, and Europe. Switch will run consumers $299.99, which is 29,980 yen; for European prices, the publisher suggests fans look to local retailers.

The presentation from Tokyo also gave us our first glance at what’s in the package. Included in the box is the console, the dock, the Joy-Con grip, two Joy-Con controllers, two wrist-straps, an HDMI cable, and an AC adaptor.

Interestingly, Nintendo will launch the console in two different SKUs. Both configurations will be priced the same. The differences are only housed in the colors for the Joy-Con controllers — one is solid grey, the other is blue and red. 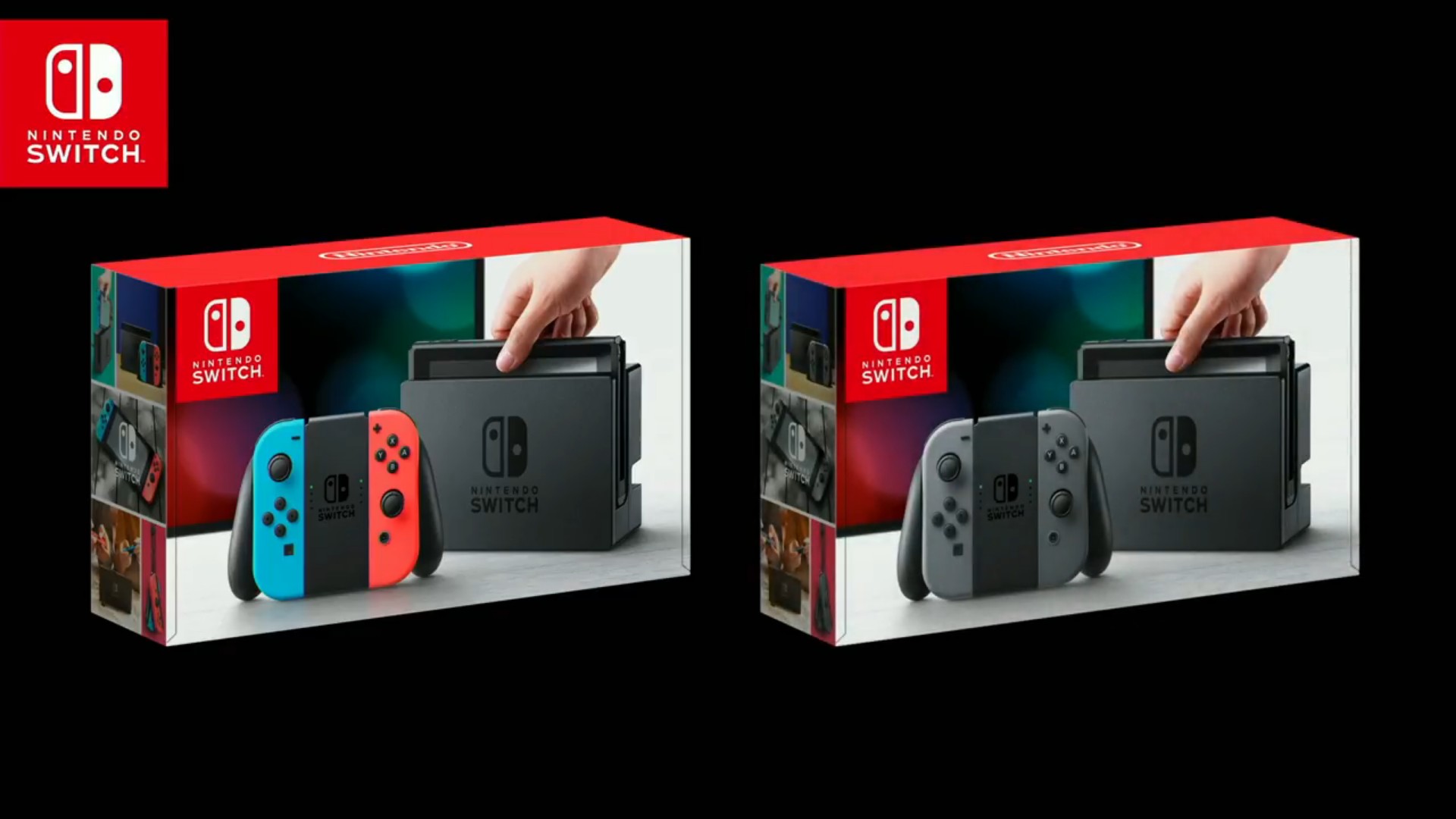 Below, you can read a fact sheet presented in a press release from Nintendo (via DualShockers):

Introducing Nintendo Switch, the new home video game system from Nintendo. In addition to providing single and multiplayer thrills at home, the Nintendo Switch system can be taken on the go so players can enjoy a full
home console experience anytime, anywhere. The mobility of a handheld is now added to the power of a home gaming system, with unprecedented new play styles brought to life by the two new Joy-Con controllers.
At home the system rests in the Nintendo Switch dock, which lets you play with family and friends on a TV in the comfort of your living room. By simply lifting Nintendo Switch from the dock at any time, the system instantly
transitions to handheld mode, and the same great gaming experience that was being enjoyed at home now travels with you. The portability of Nintendo Switch is enhanced by its 6.2-inch screen, which displays bright,
high-definition gameplay at the park, on an airplane, in a car, or at a friend’s apartment.

Nintendo Switch comes with two Joy-Con that can each act as a standalone controller with an analog stick, a full complement of face and shoulder buttons, built in motion-sensing technology and new HD Rumble. They can
be inserted into a Joy-Con grip accessory to be used like a traditional controller, held comfortably in each hand for independent left and right motion controls, or shared between two players for instant multiplayer gaming in front of the TV or out on the go.

• Home Gaming System
• At home the main unit rests in the Nintendo Switch dock, which connects the system to the TV and lets you play with family and friends in the comfort of your living room.
• On-the-Go
• Lift Nintendo Switch from the dock and instantly transition to handheld mode for on-the-go gaming. By sharing Joy-Con, players can go head-to-head while away from home. You can also enjoy the same great games in tabletop mode by using the included stand to prop the system up.
• New Play Styles
o Remove the detachable Joy-Con from either side of Nintendo Switch for more play styles:
• One player can use a Joy-Con in each hand • Two players can each take one
• Multiple Joy-Con can be employed by numerous people for a variety of gameplay options (additional Joy-Con sold separately)
• Slip a set of Joy-Con into a Joy-Con grip accessory, mirroring a more traditional controller. Or, select an optional Nintendo Switch Pro Controller.
o Bring together up to 8 Nintendo Switch systems for local face-to-face multiplayer.
• Joy-Con
o Includes traditional inputs of previous platforms, such as two analog sticks, A/B/X/Y buttons (or directional buttons), and two shoulder buttons.
o Each Joy-Con can be used as a single controller. When playing this way, Joy-Con (L) and Joy-Con (R) have the same button layout. When a Joy-Con is held horizontally, the buttons on top can be used as L and R Buttons (they are called the SL and SR Buttons).
o Capture Button: The Capture Button is located on Joy-Con (L) and is used to take gameplay screen shots.
The player can then view, edit (add text of various sizes, colors and positions) and post them to popular social media networks
o Motion Control: Each Joy-Con includes a gyroscope and accelerometer.
o HD Rumble: Both Joy-Con include advanced HD Rumble, which can provide compatible games with subtle vibrations that are much more realistic than before. The effect is so detailed that a player could, for example, feel the sensation of individual ice cubes colliding inside a glass when shaking a Joy-Con. With HD Rumble you can experience a level of realism not possible through sights and sounds alone.
o IR Motion Camera: Joy-Con (R) includes an IR Motion Camera that can detect the distance, shape and motion of nearby objects in specially designed games. For example, it can tell how far away a player’s hand is, and even if the hand is forming a rock, paper or scissors shape.
o amiibo: There is an NFC reader/writer located on Joy-Con (R). (This is also included in the Nintendo Switch Pro Controller.) Nintendo Switch is compatible with existing amiibo; usage is game-dependent.
o Rechargeable: Joy-Con charge while attached to a docked Nintendo Switch system. They can also be charged using a Nintendo Switch charging grip accessory (sold separately).
o Colors: Joy-Con are available in multiple colors at launch: gray, neon red and neon blue.
o Release Button: On the back of each Joy-Con is a small button that is pressed to detach the controller
from the main unit.
• Enhanced Parental Controls
o The system includes various on-device parental controls, but parents can also download a smart device application that can be used to easily and conveniently monitor and set parental controls for a Nintendo Switch system.

OTHER DETAILS
• Screen: Nintendo Switch has a 6.2-inch capacitive multi-touch screen that can display a resolution of 1280 x 720.
• Dock: The Nintendo Switch dock holds, powers, and charges the system, and outputs video and audio fromthe system to a TV or external display.
• Stand: A stand on the back of the main unit can be deployed to position the system upright in tabletop mode.
• Media: Game cards
• Video Output: HDMI; up to 1080p resolution when played in TV mode (up to 720p when played in handheld or tabletop mode)
• Audio Output: TV Mode supports 5.1 channel surround sound. Using the system’s built-in audio jack, stereo speakers or headphones can be used when played in handheld or tabletop modes.
• Battery: Battery life can last for more than six hours, but will vary depending on the software and usage conditions. For example, The Legend of Zelda: Breath of the Wild can be played for roughly three hours on a
single charge. While away from home, Nintendo Switch can be charged by plugging the AC adapter into the console’s USB Type-C connector.
• Storage: Nintendo Switch has 32GB of internal storage, a portion of which is reserved for use by the system, and has the option to expand its capacity using microSDXC or microSDHC memory cards.
• SoC: Custom Tegra processor powered by NVIDIA
• Other: USB ports on the Nintendo Switch dock can be used to charge accessories such as the Nintendo Switch Pro Controller and Joy-Con attached to a Joy-Con charging grip. The USB ports can also be used witha USB LAN adaptor to connect to the Internet.
• Networking: Nintendo Switch can connect to the Internet via a wireless (IEEE 802.11ac) connection. In addition, up to 8 systems can connect over a local wireless connection in compatible multiplayer games. While docked, Nintendo Switch can also use a wired Internet connection by connecting a LAN Adapter.

Are you excited for the Nintendo Switch? Plan on purchasing day one? Let us know in the comments below.