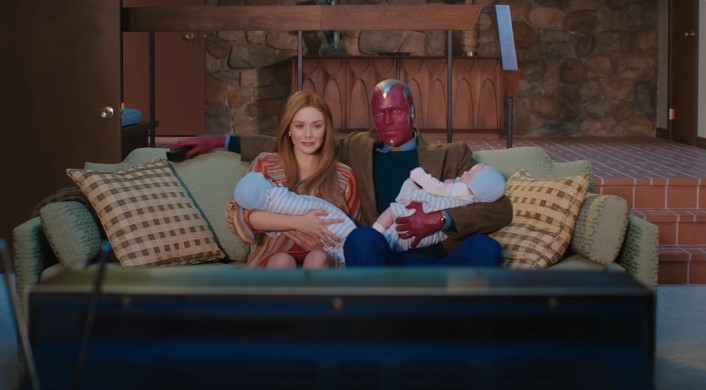 We had just gotten a new teaser for WandaVision thanks to Disney’s Investor Day, but a photo of Wanda and Vision holding their children—twins William and Thomas—had leaked online. As if to counter the leak, Disney has released a new TV spot for the series featuring the twins.

Seeing that it’s speculated that Wanda has somehow been trapped in an alternate reality, it’s possible that these kids aren’t real at all. Then again, with the two of them becoming their own full-fledged heroes in the comics—Wiccan and Speed—I’m curious how Marvel is going to handle the story.

I think it’s interesting that Wanda should have twins, seeing that she’s a twin herself. While it hasn’t been mentioned at all lately, we should remember that Wanda had a twin, Pietro who had died in Avengers: Age of Ultron, the very same movie he was introduced in. With the MCU basically shoving Quicksilver under the rug, I’m really hoping that WandaVision addresses him. I mean, we’ve barely gotten to watch Wanda grieve over Pietro, and he may as well not have existed, seeing that we’ve only really watched Wanda care for Vision.

For now, fans just wait for the premiere of the MCU in January. If it weren’t for COVID, we would have already gotten to watch Black Widow, The Falcon and The Winter Soldier, and Eternals by now; but COVID did happen and now MCU Phase 4 is set to debut with WandaVision. Let’s just hope that it manages to please.