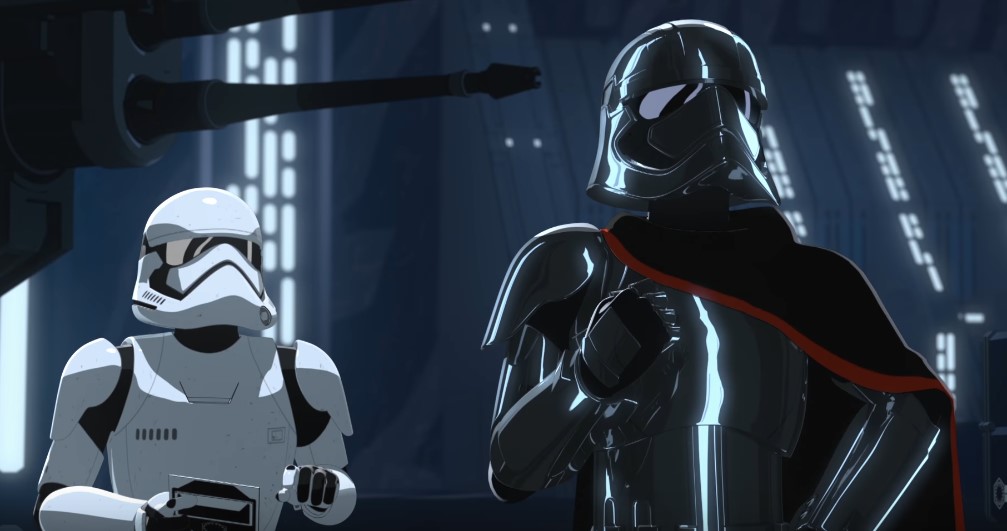 Star Wars Rebels may be over, but that doesn’t mean that the train has stopped for Lucasfilm’s animated series. Next month will see the premiere of Star Wars Resistance, and we have a new extended sneak peek which gives us a good expansion of the world and what we’ve already seen.

Though the earlier previews and featurettes focus on the world of the Colossus and the racing teams of the Aces and Team Fireball, this new sneak peek gives us a look at the looming threat of the First Order. We have a return from main characters like Leia, Poe, and Captain Phasma, plus a look at newer characters like that golden stormtooper and a TIE pilot in red armor Major Vonreg.

Besides the First Order, we’re also exposed to some pirates very much akin to Enfys Nest’s Cloud Riders from Solo: A Star Wars Story. If you look at the costumes of the marauders, you can see that their outfits are decorated with Imperial pins—assuming they took these off of officers that they’ve killed.

To be honest, the reception of the fanbase for Resistance is coming out as divisive as The Last Jedi. For one, some Star Wars fans still think that type of humor doesn’t fit in to the world; another gripe is the cell-shaded animation style that is vastly different from Rebels.

Some more optimistic fans are thinking that this naturally happens with every new series, and the fans will eventually quiet down after they see a couple of episodes. A lot of people weren’t into Star Wars Rebels when it came out, but that show ended with such a huge following.

Personally, if the kids love it, I think Lucasfilm has already done their job.