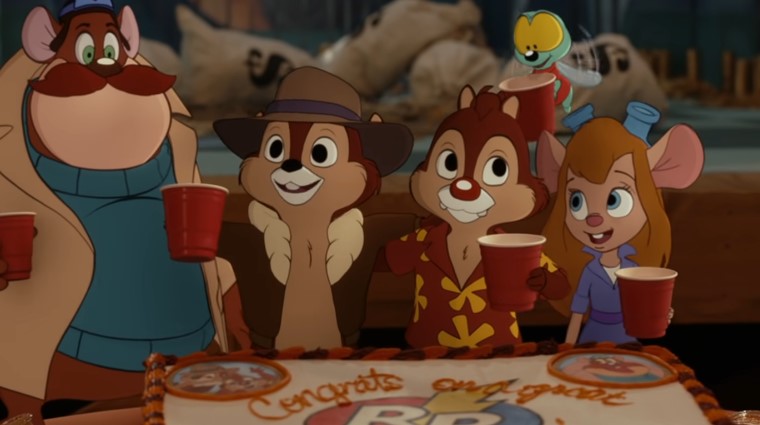 There have been several movies that tried to blend live-action with 2D after Who Framed Roger Rabbit, but they never quite embraced the ‘world’ that Roger Rabbit presented—until now.

Just in, Disney+ has dropped the trailer for their Chip ‘n Dale: Rescue Rangers movie, and it gets so surprisingly meta that you might forget this was a Disney movie.

Though the Space Jam movies have given us live-action with 2D animation, it’s the setting of Roger Rabbit that makes the film so unique—with cartoons existing in the real-world, functioning like actors. It looks like Rescue Rangers is going to be following the same setting, with multiple other animated characters showing up in the world.

It’s also great how the movie manages to address the real-life animation industry, with Dale getting surgery for a “CG upgrade” and the two running into a town filled with animation from the Polar Express era.

In “Chip ‘n Dale: Rescue Rangers,” Chip and Dale are living amongst cartoons and humans in modern-day Los Angeles, but their lives are quite different now. It has been decades since their successful television series was canceled, and Chip (John Mulaney) has succumbed to a life of suburban domesticity as an insurance salesman. Dale (Andy Samberg), meanwhile, has had CGI surgery and works the nostalgia convention circuit, desperate to relive his glory days. When a former cast mate mysteriously disappears, Chip and Dale must repair their broken friendship and take on their Rescue Rangers detective personas once again to save their friend’s life.

Chip ‘n Dale: Rescue Rangers comes to Disney+ on May 20.