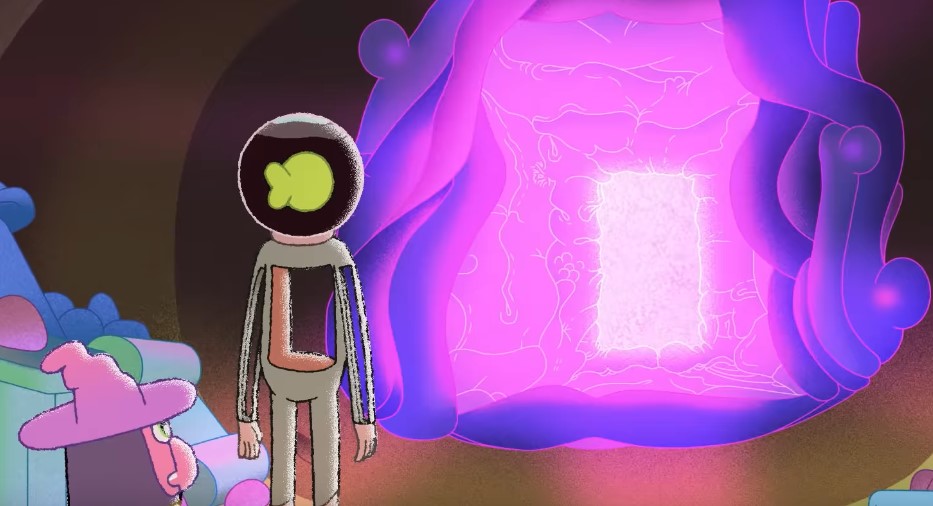 After his success with Adventure Time, Pendleton Ward has teamed up with Netflix for a surreal new show called The Midnight Gospel. Just in, we have a new trailer for the series, and it’s as crazy as you can expect it to be.

Traversing trippy worlds inside his multiverse simulator, a space-caster explores existential questions about life, death and everything in between.

What’s interesting about the show is that it will take snippets from comedian Duncan Trussell’s podcast Duncan Trussell Family Hour Podcast and animate them in Ward’s signature style. As you can see, a lot of the Adventure Time look is there, but this time, Ward is allowed to go crazy with his imagination, and we can see a lot of kookier things that you won’t be able to see in a kids show.

I have to say, the show definitely looks interesting, and Ward and Trussell are wonderfully bouncing off each other when it comes to their creativity; Trussell with his other-worldly topics, and Ward with his out-of-this-world visuals. We don’t know how a podcast-turned-cartoon is going to come out as a show, but I’m all up for it, being a fan of Ward’s previous work.

Though COVID-19 has grinded everything to a halt, it’s great to see that Netflix can still release their new shows on time. I wonder just when they’re going to run out of prepared material as the year trudges along though.

Catch The Midnight Gospel when it premiers on Netflix on April 20.