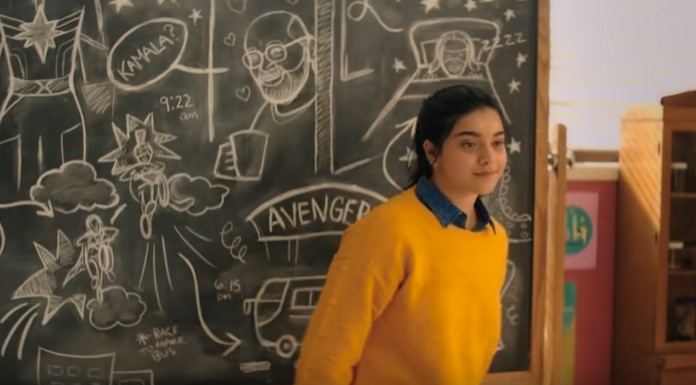 A lot of fans are excited for Kamala Khan’s debut in the MCU, and though we’ve yet to get a first teaser, some official promo art has some fans asking questions as to the powers of Ms. Marvel.

The first full look at the #MCU's #MsMarvel costume has been revealed! pic.twitter.com/tD8rYfsKYM

Besides the costume, you can see that her left hand is covered in some kind of purple crystal/energy. If you’ve played Square Enix’s Avengers game or read the comics, you’ll know that Kamala’s powers are to stretch and enlarge parts of her body; with the promo image, it’s suggested that she could make solid projections that resemble body parts—kind of like a more limited, purple Green Lantern.

While I would have preferred Kamala’s original powers from the comics, some are thinking that it looks very similar to Reed Richards’/Mr. Fantastic’s skillset; so naturally Marvel would want to make each character feel distinct. I just think that Kamala’s catchprase (“Embiggen!”) works better with stretchy powers rather than projection powers. I mean, almost every hero from Captain Marvel to Scarlet Witch has powers where they’re covered in “energy”; Kamala could have been different.

Then again, this is just speculation based on a cutout. Maybe Marvel is going the more comic-accurate route, but I guess we’ll just have to wait and see.

No release date has been set for Ms. Marvel yet, but the show is expected to release on Disney+ sometime later this year. In the meantime, Marvel’s next show, What If…? Is set to premiere on Aug. 11.