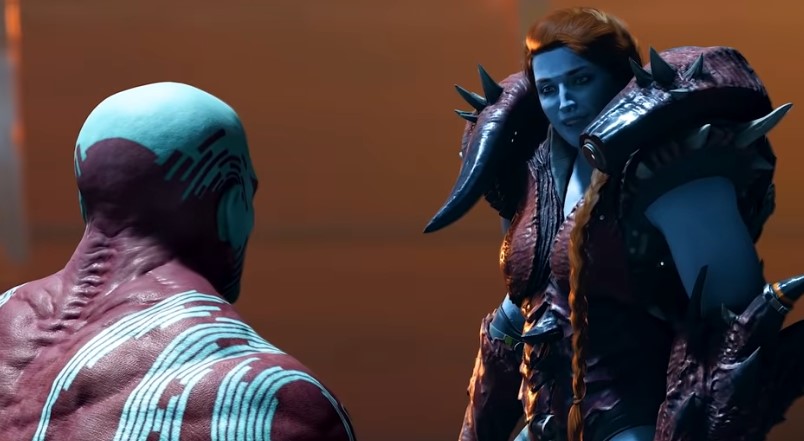 Last June we got a good look at Square Enix’s upcoming Guardians of the Galaxy game, and with the title coming out this October, we now have a new cutscene showing off one of the game’s new characters, Lady Hellbender.

Meet Lady Hellbender: leader of the Hellraisers, queen of Seknarf Nine and monster collector. In this scene, the Guardians try to con her by pretending to sell a “rare monster”, either Rocket or Groot, depending on the player’s choices. This is the start of a great love/hate relationship. (Mostly hate 👀)

This looks to be a continuation of the opening scene which was revealed earlier this year, and it gives a great look at the creatures in-game as well as the choices that you have to make as a player when it comes to interactions.

Though fans are still reeling from the poor performance of the Avengers game, I’m actually getting more interested in this Guardians title. The interaction between the characters is fun to watch, and it looks like Square wants to bank in on the Lady Dimitriscu hype by introducing another giant, provocative woman.

While I do have irks about characters designs, I think Guardians definitely has its own unique feel to Avengers. Hopefully they’ll manage to get the heart and humor that made the movies so popular in the first place.

Marvel’s Guardians of the Galaxy will come out for Xbox Series X|S, PS4|PS5, and PC this Oct. 26.