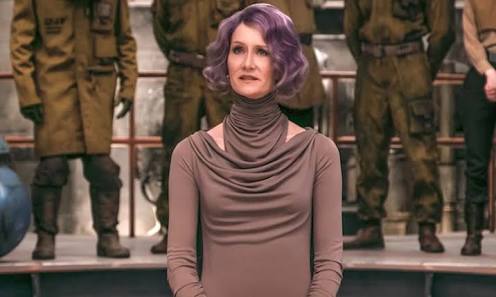 It has been a little more than three months since the most recent installment of Star Wars, Star Wars: The Last Jedi, premiered. However, every week it seems like the cast and crew of the movie make it to the news cycle. This week it was all about Laura Dern aka Vice Admiral Amilyn Holdo.

In the commentary track of The Last Jedi, Rian Johnson, director of the film confirms that Laura Dern actually made “pew! pew!” sounds whenever a scene calls for her to use a blaster:

“You can see Laura Dern say ‘pew’ when she fires the gun, which she could never not do every time she shot it.”

The actual “pew!” sounds were expectedly edited out of the movie. While this story is only making headlines now, Dern has actually divulged this fact a few months ago while promoting the upcoming premiere of The Last Jedi. In an interview with Stephen Colbert on his late night TV show, the veteran actress explained that the role has transported her back to her childhood. Whenever she is acting on set, it feels like she is 8 years old again, in her bedroom, playing pretend:

“I’m gonna tell you the most embarrassing story. There is a moment where I get to have a space weapon in my hand, and I guess that I didn’t realize that I (I was imagining I) was back in my bedroom at eight years old, doing the scene. And I went, ‘Pew! Pew!’ as I was (firing). They’ve taken the sound out. You won’t hear that in the movie, hopefully.”

This is not the first time the actress revealed tidbits about being on set and playing what could be another iconic Star Wars role.

In an interview with The Los Angeles Times late last year following the premiere of the film, Dern was asked about her initial thoughts regarding Admiral Holdo. The actress talks about her meeting with Johnson. During their meeting, Johnson described Holdo to be a woman who is secure, strong and steadfast:

“The first thing he described was this quality of someone who is so steadfast that you don’t know what side they’re on because they don’t need the rest of the world to know their plans. The kind of person — the kind of woman — who is clear in her voice, and even in the company of men questioning her doesn’t need to justify her behavior or her choices because if she was outspoken about it, it might not allow the plan to have room.”

In the same sit-down, Dern gushes about her part in Star Wars. She is excited and proud to represent powerful women in such an iconic movie:

“Especially in the zeitgeist of all we’re thinking about in terms of who women are in positions of power, and not being impacted by abuses of power — I just feel really proud to be part of that storyline in a film that’s being seen so widely, and by a generation of girls and boys that we’re all raising. All these characters are equally complicated, diverse and powerfully heroic… I just love it.”