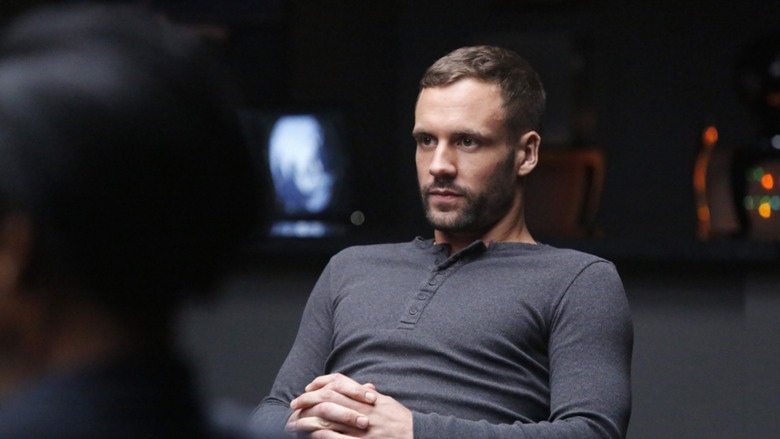 Actor Nick Blood recently spoke with TV Line about his appearance in ‘Agents of S.H.I.E.L.D,’ season 5’s “Rewind” after his character Lance Hunter hadn’t been seen since season 3. In this episode we saw Lance Hunter come to the rescue of Leo Fitz, but will this be the last time we see him?

“Who knows! You know what Marvel’s like…,” said Nick Blood to TV Line. “Agents of S.H.I.E.L.D. is always full of surprises, and things can change overnight. Like, I don’t think anyone expected Brett Dalton to return, and yet he did [for the Framework arc]. You never know in this world, but I’m sure I will be the last to be told their plans!”

In “Rewind” we finally got to see what happened in present days since most of this season has taken place on a space station overseen by the Kree. Fitz was the only one left behind and was imprisoned because of what happened after the events in season 4, but Hunter helps to break him out and find a way to get back to their allies.

It’s been the only episode mostly set in the present day, as the team has been sent forward in time to a derelict space station overseen by the Kree, revealed to be on a chunk of the destroyed planet Earth.

Before the episode aired Nick Blood had this to say about his ‘Agents of S.H.I.E.L.D.’ character;

“Well, he’s been up his usual tricks, doing some mercenary work and bickering with Bobbi,” said Blood. “He doesn’t necessarily have access to all the bells-and-whistles and gadgetry that SHIELD did, so he has to use his charm and his wit to break down doors, and call in a few favors from his dodgy friends — who at times are quite unreliable!”

It sure does sound like we could be seeing more of Lance Hunter, but considering how this season is going who knows what will happen next as we’re half expecting some people to die this season. What do you think? Do you think Lance Hunter will be around for longer? Are you happy to see him back? Let us know in the comments below.

The next episode “Fun and Games” will air January 5th.