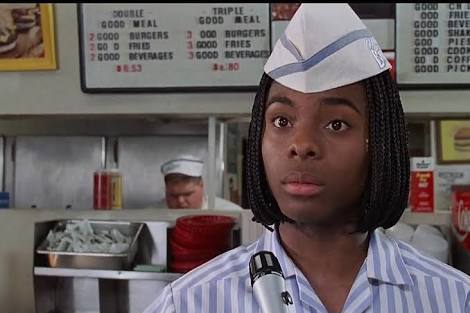 In the last few years, it seems like Tinsel town has caught the nostalgia bug. 2018 in particular seems to have zeroed in on bring back shows from the 90’s and early 2000s. For instance, this year The X Files, Tomb Raider, Roseanne, and Queer Eye for the Straight Guy are getting reboots.

Pop culture fans are on the fence about bringing their favorite characters and storylines back to life. After all, not all recent reboots have been successful. Top of mind – remakes of the Blair Witch Project and Independence Day failed to impress audiences.

Nevertheless, children of the 90s would be excited to learn that one beloved film might finally get a follow-up.

Former Nickelodeon star Kel Mitchell recently revealed there has already been a discussion about Good Burger 2. In an interview withhttps://www.buzzfeed.com/christianzamora/kel-mitchell-spilled-some-tea Buzzfeed, the actor explained that there was already a meeting about the film and that he would be very excited to return to the role:

“The conversations have started. There’s something in the water, everything’s coming back. It will definitely be awesome and there was a meeting! They’re just working everything out contractually, so just keep your ears to the streets.”

Who “they” are remains unclear. However, Kel further reveals that he has been in touch with his former Nickelodeon partner Kenan Thompson:

Good Burger is not exactly a critically acclaimed film. However, it has developed a cult following especially for kids who grew up with Kenan and Kel on Nickelodeon. In fact, the following for the movie is very strong that a few fans have created a petition on The Petition Site urging studios to greenlight Good Burger 2:

“90s kids know what they want: a sequel to one of their favorite childhood films, Nickelodeon’s Good Burger. In 1997, the world of cinema was forever changed when Kenan and Kel’s fast food comedy Good Burger graced the big screen. The film tells the story of bumbling Good Burger fast food employee Ed and his coworker Dexter and their attempts to shut down the evil competing chain Mondo Burger. Over the past decade, the film has become a cult classic. Recently, Kel Mitchell (who plays “Ed” in the film) said that him and co-star Kenan Thompson were considering making a sequel. America deserves a sequel to Good Burger. The world deserves a sequel to Good Burger.” read a part of the petition.

Kenan Thompson has yet to respond to Kel’s statements. He is currently the longest-running cast member on Saturday Night Live. Kel, on the other hand, is currently starring on the Nickelodeon show Game Changers. Like Kenan, Nickelodeon has also yet to publish a statement about Good Burger 2.