The Batmobile in Batman v Superman was a heavily armored tank-like behemoth, deadly and sleek. The film received criticism because of it, but production designer Patrick Tatopoulos has added even more firepower for the Justice League iteration. “You have missile launchers, you have cannons, you have machine guns,” Tatopoulos said of the vehicle. Check out a first look image below: 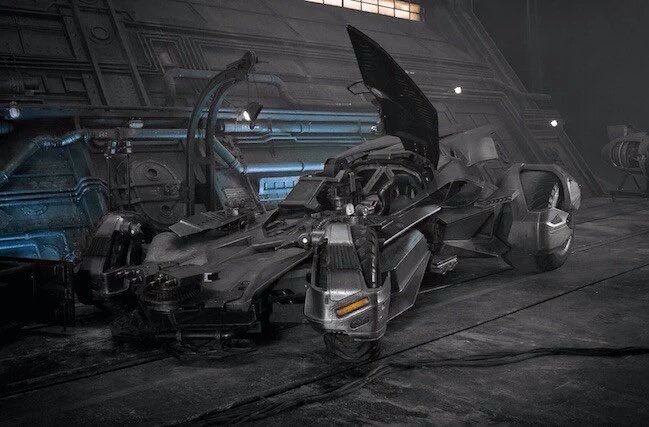 The Batmobile won’t be the only Bat-designed vehicle to appear in the ensemble team-up film. Justice League will introduce the “Flying Fox,” an airship for all League members to hop aboard. This new vehicle is “big enough for the Batmobile and it can house other Bat-gadgets,” DC Films producer Charles Roven revealed. “It’s definitely its own self-contained, fantastic piece of equipment.” According to CBR, the airship hasn’t been built, but concept images were shown at a press event that have yet to be made public.

Another vehicle, “Nightcrawler,” is set to appear, as well. There are no images, concept or otherwise, being shown, but it’s meant for one person to command and will “sport multiple legs, designed to shimmy through tight spaces.”

During the event, Producer Deborah Snyder described how the “Nightcrawler” will work practically:

“There’s an action set piece — we’re gonna take you to this tunnel. It’s a tunnel they were gonna build between Metropolis and Gotham and it had been abandoned, so the project never really went forward. But there’s abandoned remains of what started to be this tunnel. It’s pretty hard to get the Batmobile through there, so it’s nice to have the Crawler, which can maneuver.”

Of course, there can’t be a Batman film without an upgraded Batsuit. For Justice League the Dark Knight will add an additional “standard” suit, alongside another armored Batsuit. Costume designer Michael Wilkinson described this new armored outfit as a “tactical Batsuit.” Wilkinson added: “In the final chapter of our film, Batman realizes he has to step up his game a little bit. He and Alfred have been working on developing a suit that’s even more protective than the classic suit.”

All of this Bat-tech will be available for our viewing pleasure when Justice League hits theaters on November 17, 2017.