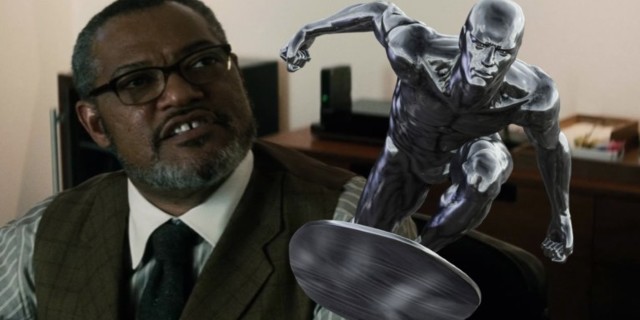 Might Laurence Fishburne be making a return to the role of the Silver Surfer? We know the idea sounds crazy, but thanks to recent developments (Disney buying all the things) the rights to Fantastic Four, X-Men and yes Silver Surfer is now back with the MCU, so the idea of the character showing up in the MCU isn’t entirely crazy.

Thanks to a fan theory by Redditor atxknicks we have some thinking to do:

“Laurence Fishburne was cast as bill foster/Goliath for the upcoming ant man and the wasp. But during the interviews, he states he came to marvel with a project but they couldn’t do it, he got cast as bill foster and then they came back to him with something big that will ‘change the world.’ At first, I thought he could just be talking about bill foster but in watching the interview, he is actually talking about ant-man and the wasp and people would figure out that he would be bill foster/goliath by his characters name so no need to be so secretive. I wonder when you put it in context of timing, this interview was a few weeks before the fox deal started to have rumors floating around. What if they approached him about becoming silver surfer again but for obvious reasons he can’t talk about it.”

This, of course, all stemmed from an interview with Laurence Fishburn that happened about several weeks before the Disney/Fox deal looked like a reality. During his interview this is what he said:

“I’ve got Black-Ish going on, I’m developing something else for Marvel that I can’t talk about. It’s gonna be really cool. It’s gonna change the world, we hope (laughs). I went to Marvel and pitched them something that really couldn’t work out, there was a lot of legal red tape that just [was] something they couldn’t work out. But then they came back with the offer for Ant-Man and the Wasp and then they said, ‘Hey, what do you think of this?’ and I went ‘Oh yeah that, yes!’ so…”

“something else” for Marvel Studios that wasn’t possible because of “legal red tape”? Hmmm, it sounds possible, right? Remember Laurence Fishburne was the voice of the Silver Surfer in Fantastic 4: Rise of the Silver Surfer even though Doug Jones played the character on screen. Now we’re not expecting Marvel ever to mention that movie (because most of us want to forget it happened) but Fishburne is a vocal icon with so much talent so why not give him another chance at it? After all, it was not his fault that movie was awful. For now, we guess we’ll have to wait and see, but thanks to the Disney/Fox deal we probably will be seeing more theories shortly.
Share