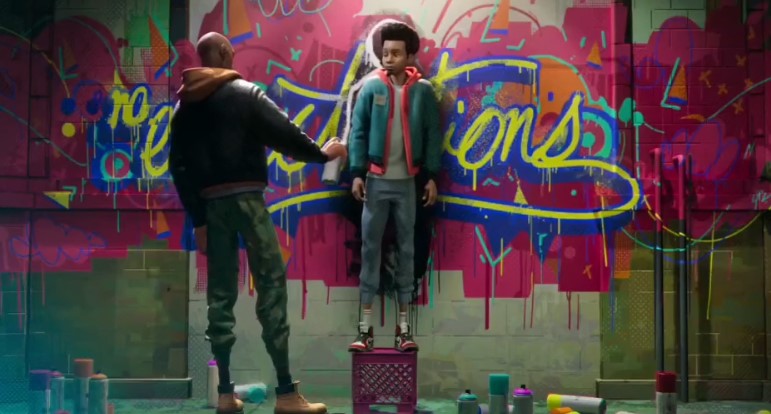 We know that Chip ‘n Dale: Rescue Rangers is a Disney property, but the film actually has a lot of Easter Eggs pertaining to all other kinds of things outside the Disney web. What’s fun is, there’s actually a reference to Sony’s animated Spider-Man: Into the Spider-Verse.

As one fan spotted on Twitter, you can see Miles’ ‘No Expectations’ mural in the background. Even Spider-Verse producer Phil Lord noticed it:

Chip and Dale are canon https://t.co/NRHOMGR1oL

Despite not having a theatrical release, a lot of good buzz has been surrounding the release of Rescue Rangers last weekend. While there are some fans who were admittedly disappointed at the lack of cameos in Doctor Strange in the Multiverse of Madness, it seems that Disney has made up for it with Rescue Rangers. With all the characters that everyone is raving about online, you would think that a theatrical release was a huge missed opportunity.

The Doctor Strange sequel may have had Multiverse in the title, but the film has seriously been out-multiversed by several properties like Spider-Man: No Way Home and Rescue Rangers; even A24 was able to give us some satisfying ‘verse-jumping’ with Everything Everywhere All at Once.

In “Chip ‘n Dale: Rescue Rangers,” Chip and Dale are living amongst cartoons and humans in modern-day Los Angeles, but their lives are quite different now. It has been decades since their successful television series was canceled, and Chip (voice of Mulaney) has succumbed to a life of suburban domesticity as an insurance salesman. Dale (voice of Sandberg), meanwhile, has had CGI surgery and works the nostalgia convention circuit, desperate to relive his glory days. When a former castmate mysteriously disappears, Chip and Dale must repair their broken friendship and take on their Rescue Rangers detective personas once again to save their friend’s life.