Back in June we learned that stand-up comedian Hannibal Buress would be starring in the upcoming MCU film Spider-Man: Homecoming from Cop Car director Jon Watts. Two weeks ago we also reported on a potential leak from the set of the movie where a call sheet was allegedly leaked confirming his role as Coach Wilson. See below: 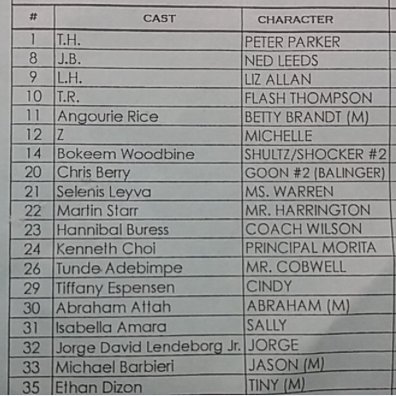 But was this leaked call sheet legitimate? Well, in an interview with The Breakfast Club radio show, Hannibal explained the role he would be playing in Spider-Man: Homecoming:

“In Spider-Man, I play a gym teacher. I play one of the dumbass characters that don’t realise he’s Spider-Man. He’s Peter Parker. I’m just like… oh man, this guy’s really athletic!”

This more or less seems to confirm the leak may be genuine, especially since Hannibal’s description suggests he is playing a Coach. It also confirms that Fargo actor Bokeem Woodbine will be playing the Spider-Man villain Shocker, alongside villains the Vulture and the Tinkerer.

As for Hannibal’s role, it’s hard to imagine him taking up too much screen time. However, as proven in his small roles in movies like Daddy’s Home and the Neighbours, he can get a couple of seconds of screen time, but walk away with the entire scene. The guy’s just that naturally gifted of a comedian.

But all will be revealed (including the mysterious Zendaya role) when Spider-Man: Homecoming swings into theatres in July 2017. The movie will take place after the events of Captain America: Civil War, and stars Tom Holland, Michael Keaton and Donald Glover. It comes from screenwriting duo Jonathan Goldstein and John Francis Daley, who brought us the Vacation reboot last year. The movie was pitched as a coming-of-age high school movie that takes inspiration from John Hughes’ filmography and also the successful Harry Potter franchise.