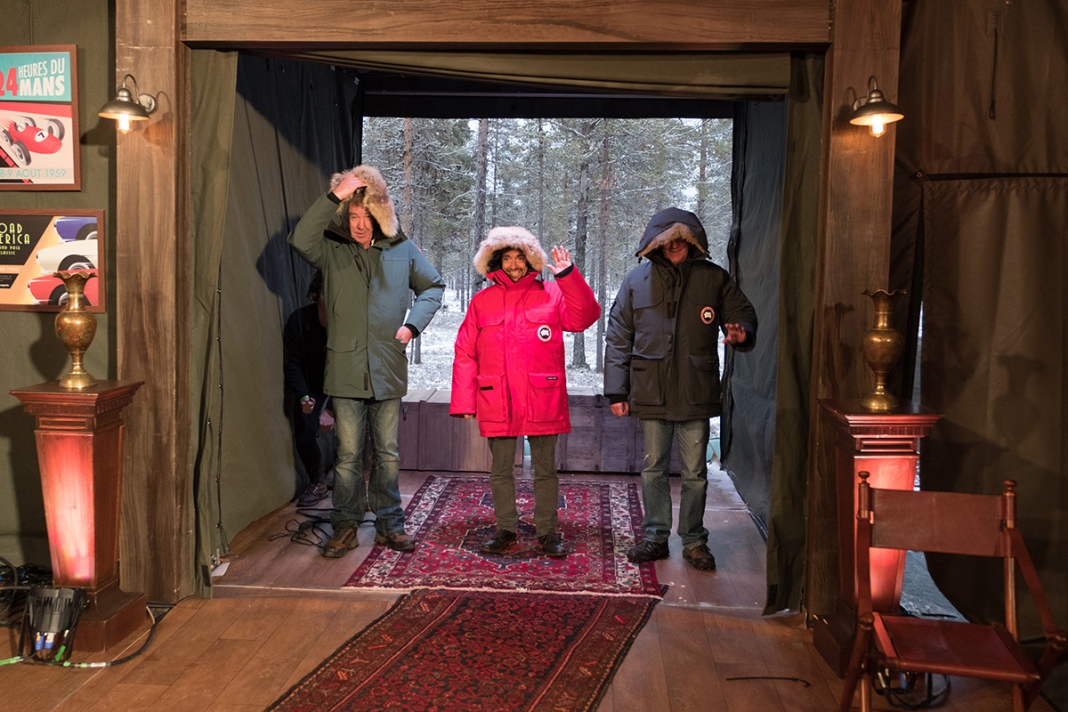 The Grand Tour really hit its stride when the boys hit Morocco, and their Christmas-themed jaunt to Finland certainly continues the trend. Once again the balance between ridiculous stunts and entertaining banter between the hosts is tuned nicely, and this time out there’s even a good amount of time dedicated to a genuinely interesting and insightful historical film from James May on the iconic 24 Hours of Le Mans rivalry between Ford and Ferrari, which birthed to the Ford GT40 and the Ferrari P3.

As entertaining as May can be when he’s cracking wise and acting the fool, he’s clearly absolutely in his element presenting an informative piece like this. Those who come to The Grand Tour for crazy hijinks may wonder if they’ve accidentally changed the channel. It’s great to see the show broaden its horizons and is most certainly comes as a really nice change of pace after an extended period of studio silliness.

That said, Finland provides the best studio sequences the show has seen to date. Celebrity Braincrash is still a misguided segment but the appearance from Formula 1’s Kimi Räikkönen drunkenly staggering around in the snow-covered woodland outside is the most amusing yet. Perhaps even more weirdly, Bob Geldof shows up via Skype during a Christmas buying guide segment. It’s pretty uncomfortable to watch the hosts play around with car-branded condoms, but there’s also a Honda teddy bear and some fabulous festive knitwear to combat the smut.

In Conversation Street, Clarkson and May end up debating which chocolate bar is more messy to eat in a car between a Double Decker and a Flake. Not quite the hard-hitting motoring journalism that the Le Mans piece provided, but hey. Unfortunately the chocolate argument is segwayed by Hammond’s already infamous ‘ice cream is gay’ comment. It’s kicked up such a storm on social media that there’s no need to go into it in huge detail here, but it’s worth asking why it was allowed to make the final cut in the first place. Certainly a comment made in poor taste by a man who clearly feels at least somewhat insecure, but it also added nothing to the conversation, nor was it amusing. When even Jeremy Clarkson looks baffled about a controversial joke, you know it’s fallen completely flat.

Hammond is much more at home on the road than in the tent and the Ford Mustang GT provides a scenic tour of the Port of London and Stonehenge. The former gives him the opportunity to have a cheeky dig at Top Gear’s controversial stunt at the Cenotaph earlier in the year, and once he arrives at the monument in Wiltshire he’s joined by Clarkson for what turns into a face-off between the GT and a Ford Focus RS. The pair race the cars up to Cheddar Gorge and then hand them over to the still tragically unfunny American for a time trial round the Eboladrome.

Hammond’s misguided and nonsensical ice cream apathy is an unfortunate blemish on what is otherwise another thoroughly entertaining episode of The Grand Tour, but believe it or not it’s a mini-historical documentary on one of motor racing’s greatest ever rivalries that really stands out.