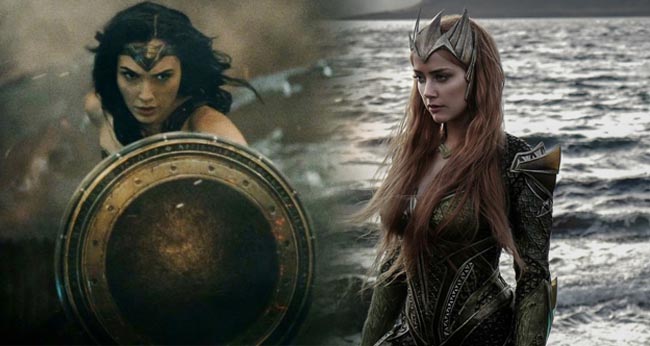 Warner Brothers might have had very little news about The Flash movie over the past few months, but last week, Justice League star Ezra Miller claimed that the Flashpoint project is still very much alive over in the DC Extended Universe.

While the studio has yet to corroborate Miller’s confirmation, fans have been going crazy over the announcement, and new fan art of the Justice League in their alternate universe costumes have been making the rounds online. One stunning new art piece does this with Gal Gadot’s Wonder Woman, imagining Diana Prince as the Flashpoint version of the Amazonian Princess preparing to battle with the Flashpoint version of Amber Heard’s Mera.

Check out the Flashpoint art piece down here:

The artist makes the heroines’ outfits much darker and sleeker, fitting the tone of the Flashpoint story. For those who haven’t been following The Flash news, the film was supposed to feature the events of the Flashpoint comic book crossover story arc which details an altered DC universe created by Barry Allen in which the Flash is the only one aware of significant differences between the new and the regular timeline.

In the altered Flashpoint timeline, Bruce Wayne’s father becomes Batman after losing his son to a mugger. His mother becomes the Joker. Cyborg becomes the big hero of this universe, while Superman finds himself being held captaive as a lab-rat by the US government. Meanwhile, Wonder Woman and Aquaman have decimated Western Europe after Diana savagely beheads Mera in a battle after the Queen of Atlantis learn that the two heroes’ had a secret affair.

It’s a pretty interesting story, one that we would love to see on the big screen.

The Flash has yet to receive a release date or a confirmation, but once it does, we’ll let everyone know. Wonder Woman 1984 hits theaters June 5, 2020.