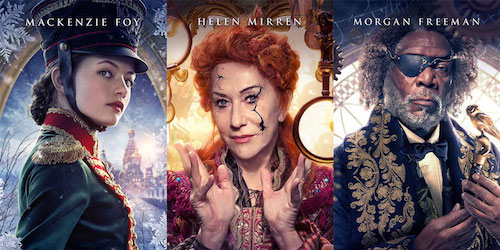 As far as holiday movies go Disney plays it safe with The Nutcracker and The Four Realms and we have to say being an adult seeing this movie right before Halloween is weird, but if we remove our black-colored glasses and forgo our often times pessimistic ability to downgrade kids films like these we actually can see where this is a very charming family-friendly film that any child especially those who love the ballet will love.

The Nutcracker and The Four Realism is very reminiscent of C.S. Lewis’ “The Lion, The Witch and The Wardrobe” how could it not be? It’s a period piece much like the C.S. Lewis classic that has our young heroine off on an adventure to find herself by helping others if not a little misguided in doing so and in her travels she enters through a snowy land and meets some fantastic creatures and people so again very very reminiscent of “The Lion, The Witch and The Wardrobe” which we think will actually make some parents very happy, but will also make it a very easy to watch film for anyone of any age.

The film features a  very ‘strong female lead’  in MacKenzie Foy’s Clara and ‘diverse cast’ that includes Morgan Freeman, Jayden Fowora-Knight, and Misty Copeland along with Helen Mirin, Kiera Knightly, and many others. The diversity does make sense it’s 2018 and Misty Copeland herself has danced in the famous Tchaikovsky ballet based on the story this movie is based off.  Of course, some people will hate it, but again kids probably won’t notice and that’s fine because what they should pay attention to is the dancing and the costumes that are reminiscent of things you see at the annual Met Gala. Though we are a bit sad to see that the dancing is quite brief.

Misty Copeland is a powerhouse and we feel as though she was underutilized she really only has one good piece of dancing in the middle of the films run (1 hour and 40 minutes) and then again at the end credits scene. It’s really a shame too because she’s a beautiful performer and everyone around the world is familiar with the Nutcracker Ballet especially the music and the dance of the sugar plum fairy seen in multiple cartoons, movies, and other productions over the years so there is a good chance based on this you may feel like you lost out and if you did we highly suggest seeing the Nutcracker Ballet you can usually find a production of it somewhere near your city around Christmas time as it’s popularity never feigns among art lovers.

The story itself is a fun tale. You have a young girl who is clever and smart, but also sad and this movie helps her find her truth and ultimately accept herself. We also love the relationship between the mouse king and the Nutcracker since it changes very much during the film. The one thing that did annoy us was Kiera Knightly’s voice, but hey she was definitely in character so we can’t fault her on that. We also loved how they added a new twist to the tale and changed around our antagonist and protagonists at times to really add more dimension to an otherwise well-known story, so yes adults will pick up on this fast we think it’s suitable for the story they were telling it teaches you to trust and the importance of listening which isn’t a horrible thing to take away from a movie that is ultimately about accepting yourself and understanding that the world around you is complicated, but ultimately like most Disney films love is what matters even in the tough times.

All in all this is a great family film, it has animals, bright and colorful candy, fantastic music, action and more and with the runtime being so short you really can’t go wrong taking kids to see this it’s not scary enough to really frighten them, but it’s also got just enough Christmas time charm to really make you feel warm and fuzzy inside which who doesn’t want during the holidays?

All in all, we’d give this a 7/10, but we’re sure plenty of kids will be loving the movie in years to come.