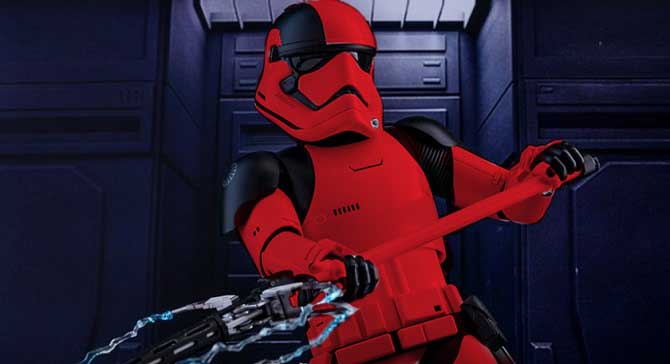 With every new Star Wars film comes a new class of stormtrooper, and there’s a rumor going around that an elite ‘Red Legion’ will be introduced in Star Wars Episode IX. Thanks to some production gear that’s leaked online, we got a glimpse of what could be this trooper’s face design, and a fan on Reddit has made this mock-up of what the Red Legion’s helmet could look like.

Take in mind this is just a fanmade concept based on very minimal clues. It’s very likely that these red troopers introduced will have an entirely different look to them. What if the pattern was for a new standard of FO troopers? Until we get an official look, my guess is just as good as everyone’s.

Star Wars Episode IX is coming out to be one of the most anticipated movies of the year. After The Force Awakens officially brought Star Wars back in 2015, we’re finally approaching the finale of the sequel trilogy. The movie is said to completely cap off the Skywalker Saga, but I’m kind of curious if we’re going to get more films down the line featuring the likes of Rey, Poe, or Finn.

Lucasfilm is yet to give us our first official look at the movie, but everyone is almost sure that we’re going to get it at Star Wars Celebration this April. Everyone is anticipating that the trailer drop will also include the title reveal—much like what Marvel did with Avengers: Endgame.