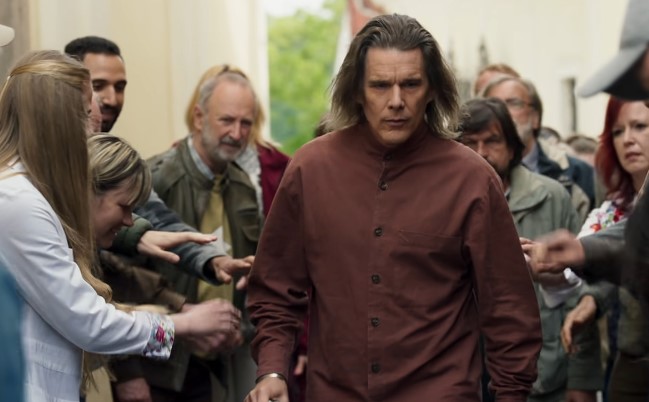 While the new Moon Knight trailer has everyone excited about Oscar Isaac’s Marc Spector, a lot of questions are coming out about Ethan Hawke’s character, Arthur Harrow. With Harrow having such a small appearance in the comics, Hawke has shared who he’s drawing inspiration from.

In an old interview with Late Night with Seth Meyers, Hawke has said that he is basing his character off of cult leader David Koresh, the head of the Branch Davidians who died in the Waco siege of 1993. Hawke said, “I’ve based my character on David Koresh!” and after Meyers joked that he was a fan of Koresh, Hawke replied laughing, “I don’t think we want to be on the record saying that. I will say that he is the basis of great character inspiration, however.”

In the comics, the character of Arthur Harrow was a talented surgeon/scientist who specialized in pain theory, and he suffers from a condition called trigeminal neuralgia which paralyzed half of his face in a permanent snarl, and it causes him constant pain.

Since the character is very obscure, it opens up a lot of doors for Moon Knight to really get creative with Arthur Harrow. He can be a cult leader in the current interpretation, but it would be interesting if he still had a connection to pain. Maybe he’s a faith healer? Maybe at one point it can be revealed that one Stephen Strange had come to him to heal his hands before he ended up in the Kamar-Taj?

Though Marvel Studios had just got access to big heroes like the X-Men and Fantastic Four, it’s going to be a while before we get to see them enter the MCU. In the meantime, we can enjoy these more obscure entries, and it opens up the door for more experimentation with the IPs.