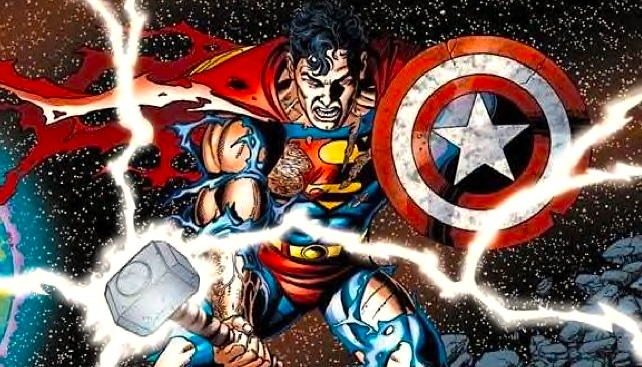 It’s happened a few times in the comics, Earth’s Mightiest meeting the World’s Finest. However, a full scale battle is unheard of. We all want it to happen on the big screen, even though it most certainly never will. It’s often left up to creative fan projects to turn our dreams into a semblance of reality. This time that project comes from a Screen Rant supercut. The epic video below offers roughly five minutes of heart-pounding action as Marvel and DC heroes duke it out. It features footage from nearly every live-action production we’ve seen from the two in recent years. Sorry DC die-hards, no Birds of Prey, but there are plenty of awesome moments to behold.

Ryan Reynold’s Deadpool taking on Ryan Reynold’s Green Lantern and the fantastic Green Arrow v Hawkeye cuts are just a few of the highlights. The action isn’t the only aspect that comes across well. Humor has a small part, and truthfully these characters seem to play off of each other nicely. Of course, it’s a matter of a clever editing and perfect timing, but witty one-liners and a super angry Hulk can make anything work.

Interestingly, Deadshot and Harley get a few shots in this hero battle. However, fingers are crossed a similar Marvel vs DC supercut will consist of villains. Don’t worry, the MCU has plenty of villains that can be utilized in the hands of fans.

The great news is, we all have a ton of films to look forward to over the next several years. Suicide Squad is on its way on August 5. Doctor Strange closes out the year of superhero films on November 4. In between, The Flash, Arrow, Legends of Tomorrow, and Supergirl carry the DC torch on TV. An epic 4-night crossover is on the horizon and it’s going to be fantastic. Gotham returns September 19, and a new animated series, Justice League Action, premieres this fall. Plus, Batman: The Telltale Series has arrived, and will see new episodes launch once a month.

But let’s not forget Marvel has some heavy hitters on the small screen also. Agents of SHIELD returns September 20, with Luke Cage coming to Netflix on September 30. What a time to love comics and all the adaptations they inspire.