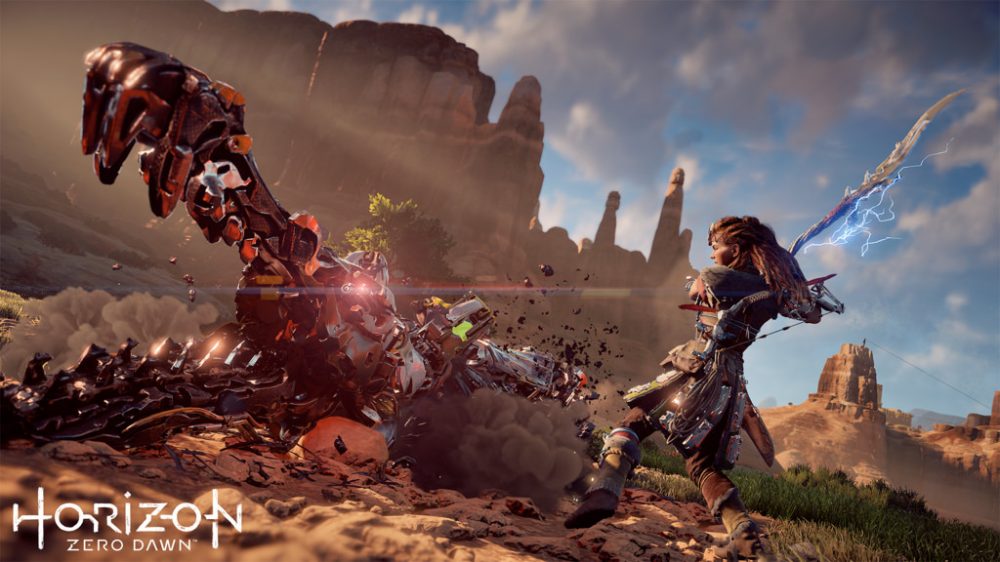 The first thing you’ll notice about Horizon: Zero Dawn is its beauty. Simply put, it is a gorgeous game. However, such visuals are expected from Guerrilla Games, if not the bulk of Sony’s first party studios. As such, Horizon has to do much more to sell consumers. If the peculiar setting and main character wasn’t enough, literally everything else is.

Horizon opens in a fairly trope-filled fashion. The lead, Aloy, was born an outcast; the tribe in which she should belong refuses to accept her. The man responsible for raising her, Rost, is an outcast also. There lies the narrative’s opening mystery. Sounds cliché, right? But as the story moves forward in main missions, her arc runs much deeper. Don’t worry, we won’t spoil it here.

Aside from the post-post apocalyptic setting with an overtly, yet beautifully, futuristic flair, Aloy stands out the most. Ashly Burch, of Borderlands and Life is Strange fame, kills it as the lead. Aloy comments on the world around her, quipping in a Nathan Drake-esque manner about things as small as running down a hill or taking out an enemy. It’s a refreshing change of pace. Personally, that was one of my biggest concerns — that I wouldn’t like the main character. After finishing Rise of the Tomb Raider, I was left disappointed in Lara. She’d fall to her death three times in just as many minutes, narrowly escaping, yet had nothing to say. In similar situations, her adventurous counterpart, Nathan Drake would have verbally run through the gamut of emotions. Thankfully, Guerrilla’s taken a page from the book it seems only Naughty Dog is interested in writing. 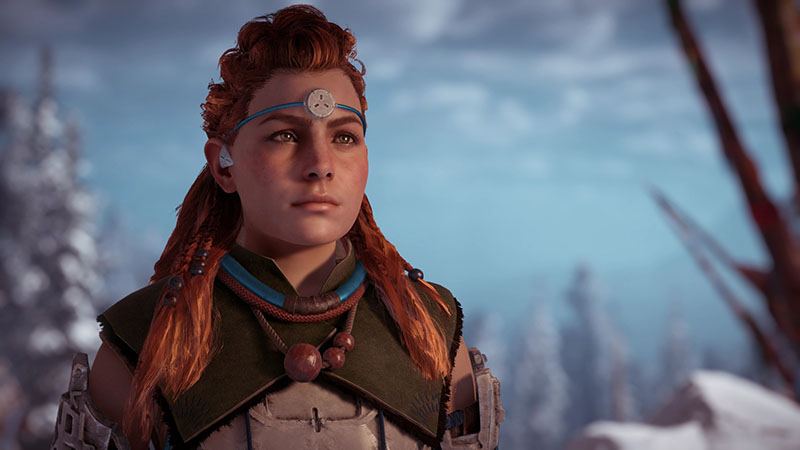 The gameplay is stellar, too. Admittedly, in some of the trailers that have been shown, the melee combat looks wonky. Upon seeing the control scheme for the first time, my worry didn’t falter. I happily say that the combat feels great, melee and ranged. Nothing feels quite as good as drawing one of the machine’s attention, before firing an arrow into their brightly glowing, singular eye. The same can be said for stealth take-downs, which are equally as satisfying.

Movement is solid too, making Aloy easy and fun to control through the environment. This is escalated by Horizon’s different levels of traversal, which are simple to navigate courtesy of its remarkably fluid climbing system. When climbing a structure, man-made or natural, all you have to do is move the left stick in the direction you want to go and she follows suit. It’s intuitive and criminally easy. If you thought the Infamous titles on PS3 nailed parkour, think again. Horizon just raised the stakes — take note Assassin’s Creed.

Simplicity, thus far, seems to be a staple of the level up system, as well. I’m only about five to seven hours in, but I can see this eventually becoming my biggest issue with the title. From what I’ve been able to tell, the upgrades don’t get very deep. They’re just building upon one another. For instance, you can upgrade your critical hit damage with the skill tree. Said upgrades can be stacked three or four times. It doesn’t get too much more interesting than that. However, weapon upgrades/bonuses, as well as those for outfits, make up for the skill tree’s lack of depth. They, too, are simple, but buffers such as aiding in stealth or bumping fire damage are looking promising early on. 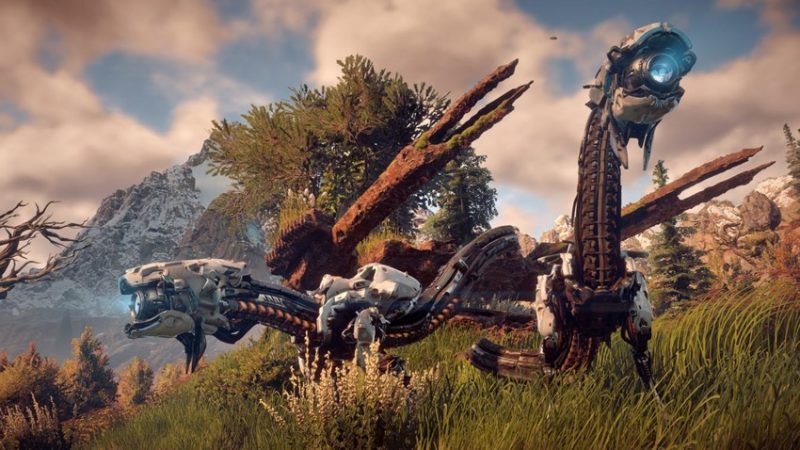 Side missions, though I’ve only done three, are pretty cool. They don’t appear to be as intricate as the ones offered in something like The Witcher or Mass Effect, yet they are interesting. The missions are split into main, errands, and side missions. The latter two are completely optional and range in variety. Errands send you on a favor trip for someone in need, while the side missions are more like smaller stories to be stumbled upon throughout the world. Both conjure up moment to moment fun that may or may not be for everyone, depending on preference.

Jon Edwards, Sony’s UK product manager, recently stated that Aloy could be the next PlayStation icon. Based on what I’ve played, she’s certainly poised to take on the face of PlayStation mantle that Nathan Drake is leaving behind. I haven’t completed Horizon: Zero Dawn yet, but I can already tell it’s something special. Needless to say, the company has another show-stopping franchise on their hands.