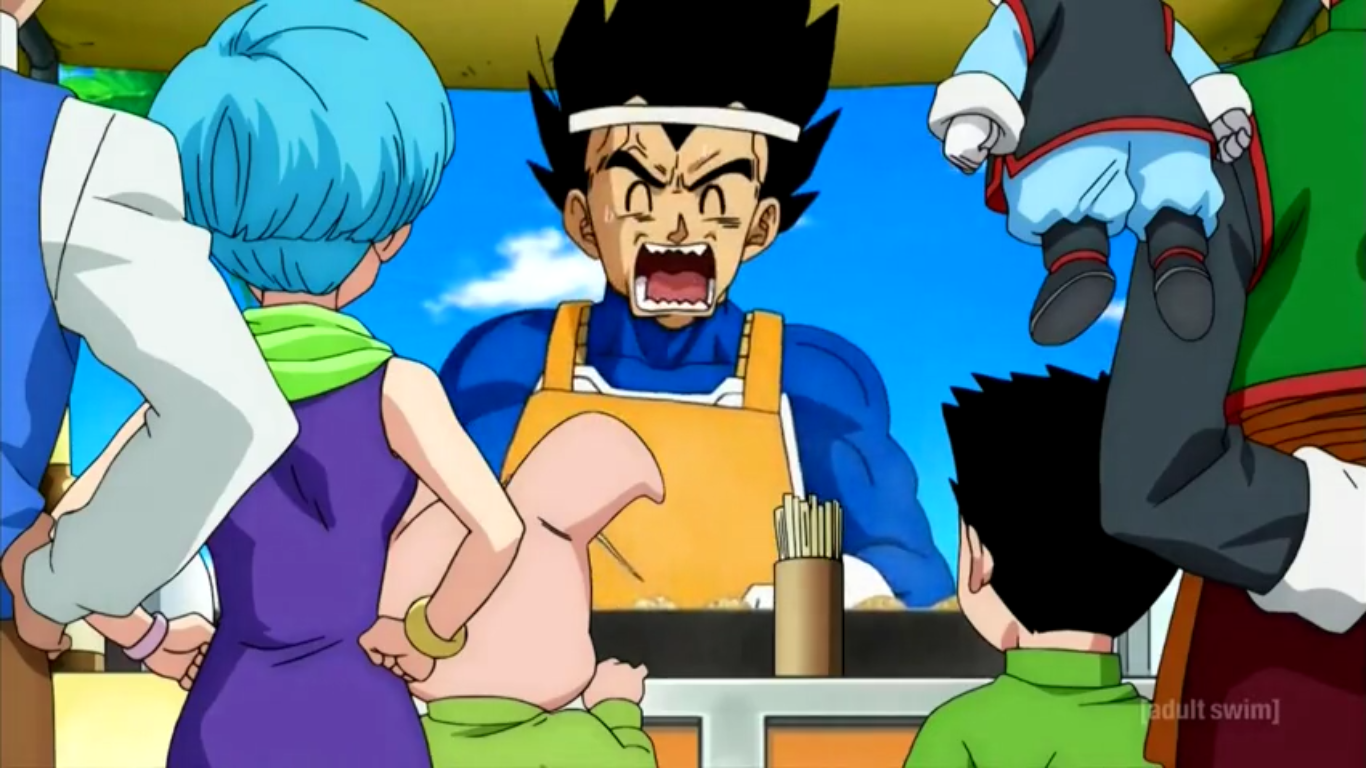 Last week we finally got our long-awaited battle between Beerus the God of Destruction and Goku. But after that epic fight, it makes sense for Dragon Ball Super to take a step back and offer us a comedic alternative as Episode 6 mainly focuses on Vegeta and his attempts to prevent Beerus from destroying the Earth.

After a brief prologue showing Goku debating what to do next in order to protect Earth, the episode then takes us to Bulma’s birthday party and stays there for the remainder. Episode 6 starts off in an effective, mood-setting manner by showcasing Vegeta’s past encounter with Beerus when he was a child. It’s an effective flashback which depicts Beerus stomping Vegeta’s Father, King Vegeta’s face into the dirt. The result completely rationalises Vegeta’s otherwise out-of-character fright; Beerus is the one who made a fool out of the father he idolises. 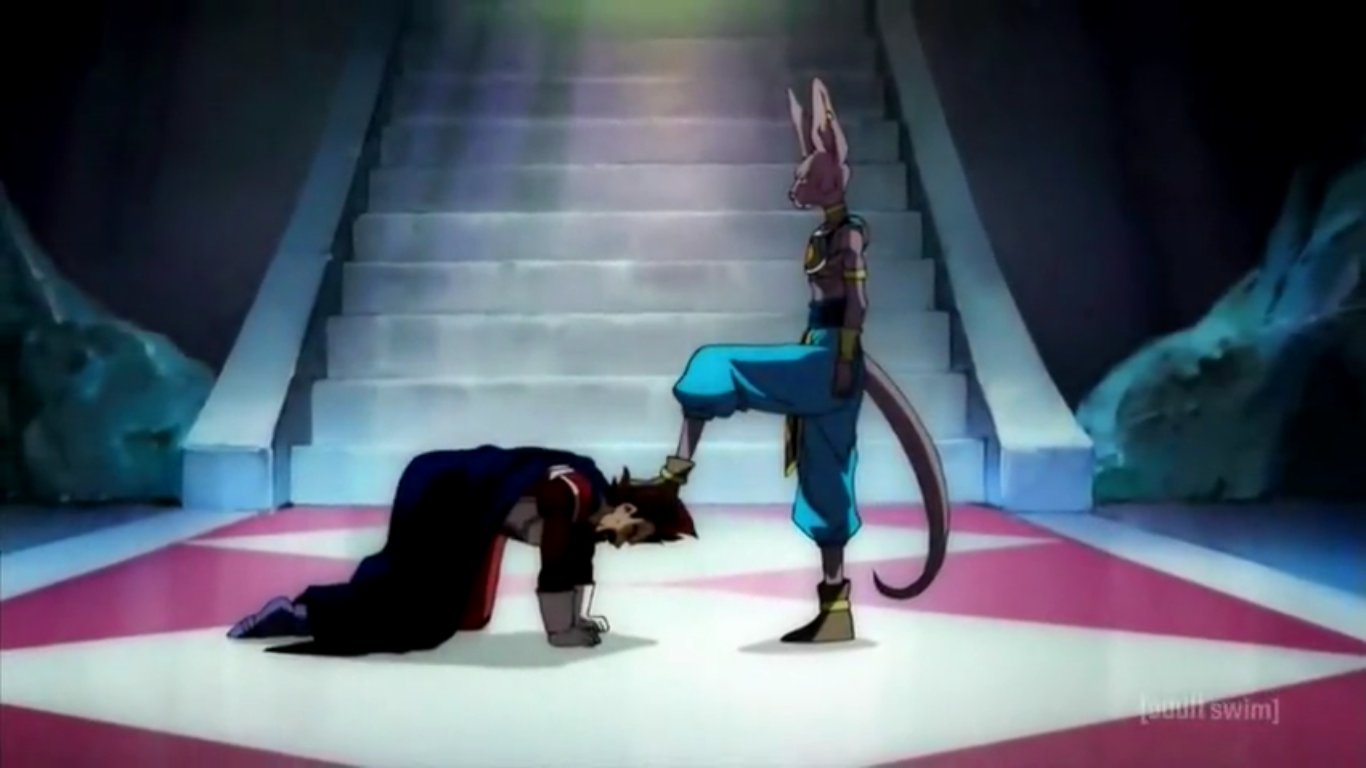 The rest of the episode can mainly be boiled down to Vegeta bending over backwards to stop his overly-social human “friends” from angering the Destroyer Deity and there’s plenty of laughs here. In fact, this is easily the funniest episode of Dragon Ball Super so far. Many of the punchlines you can see coming from a mile away. For example, when a scene starts with Goten and Trunks playing with water-guns, you can bet they’ll accidentally spray Beerus and Vegeta will have to calm him down. But the timing, execution and the animation helps to alleviate any predictability.

The main strengths of this episode are two-fold. For one, the facial expressions. Whether it’s Beerus’ reaction to getting slapped in the back by Yamcha, his reaction to eating the Takoyaki in a game of Russian Roulette (an actual eating game in Japan), Beerus’ longing gaze at pudding (“So smooth. So jiggly…”), Krillin eating the Wasabi and breathing fire on everyone and, of course, Vegeta trying to act calm as he cooks a freshly caught Octopus. 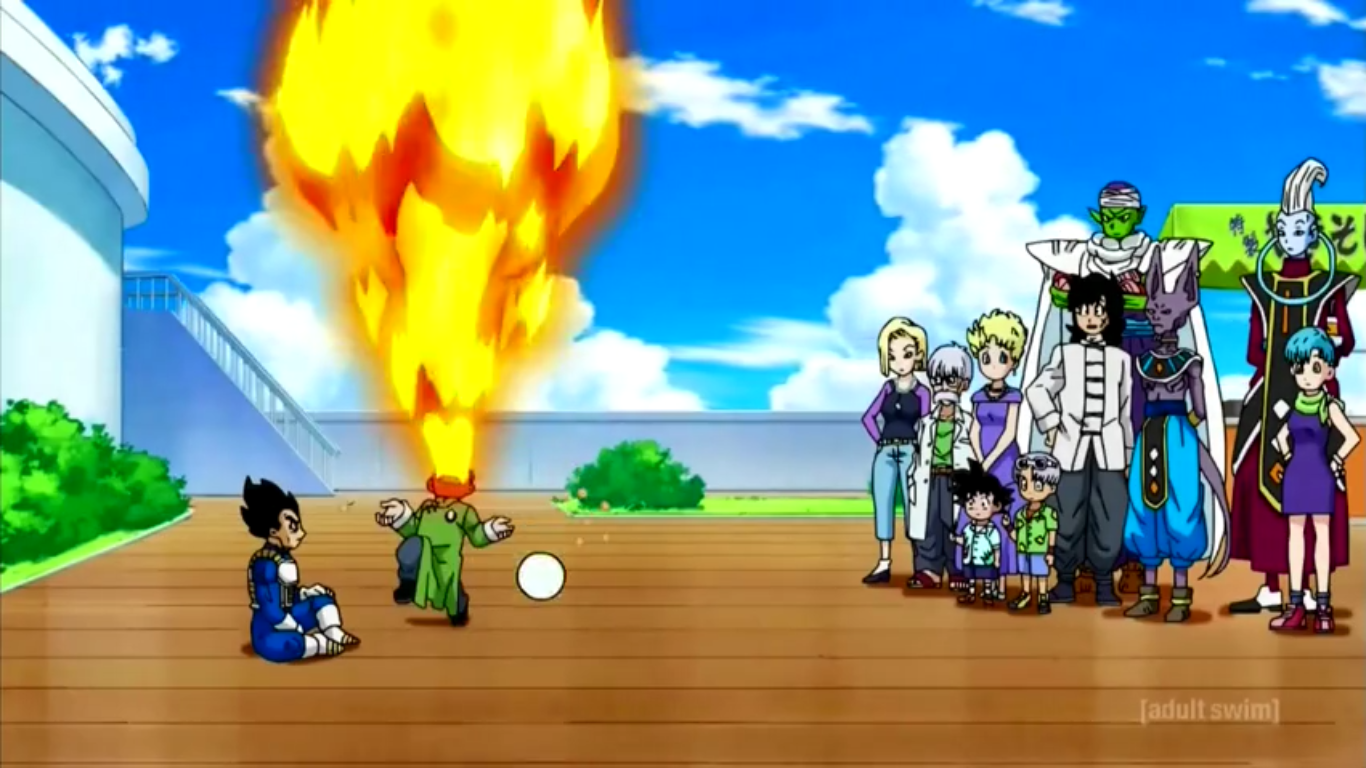 The second highlight comes from the voice acting of Christopher Sabat as Vegeta, Jason Douglas as Beerus and Ian Sinclair as Whis. Sabat often doesn’t get the chance to show how great he is comedically, but in this episode he really shines. His exasperated delivery (particularly on his “You have no idea!” line) is a side we don’t often see from the Prince of Saiyans, but it never feels out of character. Douglas continues to be terrific as Beerus, who is showing himself to be more malicious than his DBZ: Battle of Gods movie counterpart. But he’s still so dignified and gentlemanly when necessary, such as the way he talks to Bulma. But the best line delivered was by Sinclair, as he tries to convince Mr. Buu to give him and Beerus some pudding; “You see, we’re visiting from far across the Universe and I’m afraid if we don’t get to taste this delicacy now we may not get another chance for centuries and then your civilisation may not exist.” It’s such a great line that completely underplays the severity of the situation but seems so quintessentially Whis.

But because we need to advance the plot, Mr. Buu licks all of the pudding preventing Beerus from getting any and this is what makes him snap. Then we get a brief action beat which is a great example of showcasing Beerus’ power. It’s worth remembering that while Mr. Buu is weaker than his previously evil counterparts, he’s still one of the strongest characters in the (swiftly-growing) Dragon Ball Universe. But Beerus is able to effortlessly swing him around so quickly that his body breaks down into pudding-like-goo. Live by the pudding, die by the pudding, I guess. It makes for an effective cliff-hanger, though.

The only real drag of the episode is a brief scene reminding us that the Pilaf Gang is on board the ship and that they’ve eaten. That is literally the beginning and the end of their role in this episode.

When it comes to the animation, I’ve been critical of the art-style in recent episodes because when compared side-by-side with Dragon Ball Z 20 years ago, it doesn’t hold a candle to it. However, with a subdued comedic episode like this the more vibrant colours and thicker-outlines actually do the comedy justice. As mentioned earlier, the facial expressions are great and there’s also a lot of atmosphere conveyed in the King Vegeta flashback, as well as the tense pauses as Beerus reacts to whatever is about to set him into a destructive frenzy. The music was also a standout, able to be light-hearted enough to accentuate the comedy but able to be serious when it becomes clear that the stakes are very real. 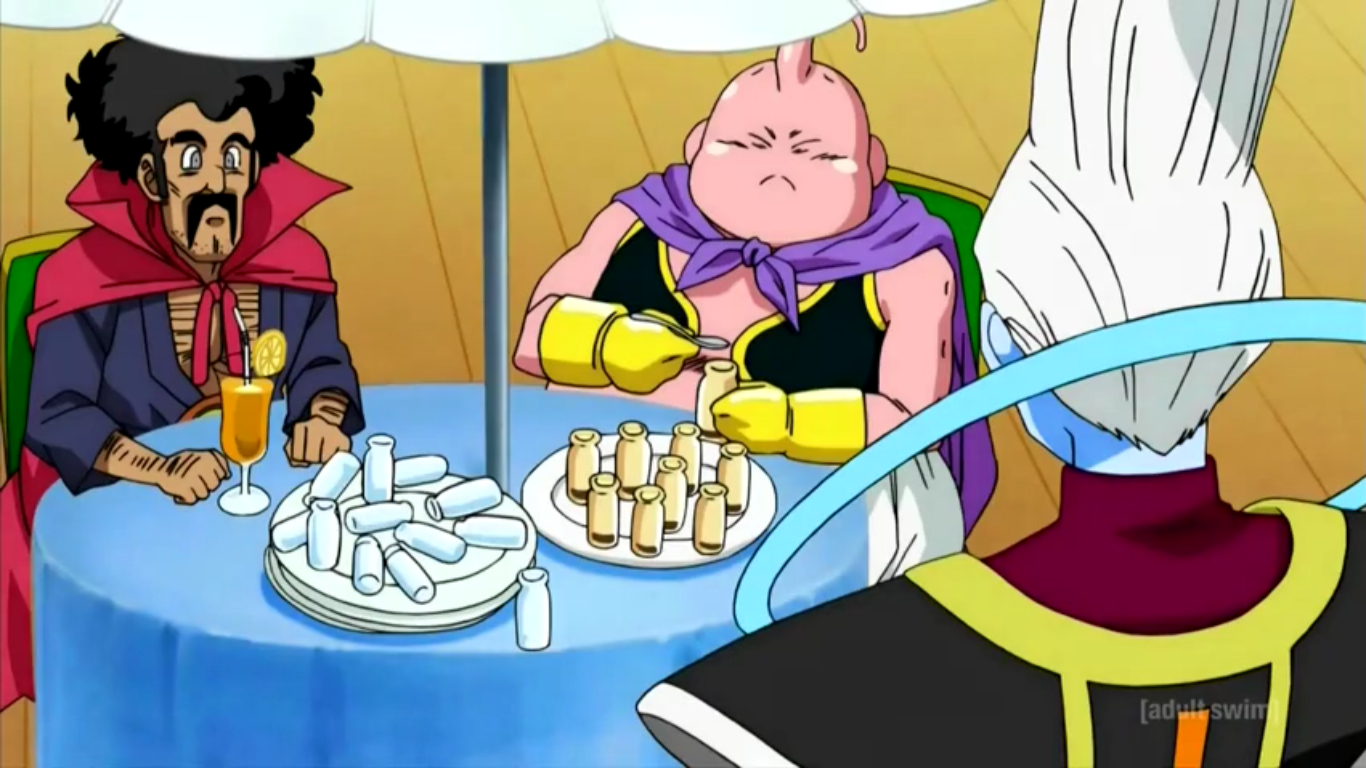 Yes, Episode 6 is mostly filler but it’s entertaining nevertheless. Its comedy hits hard, the stakes aren’t negated, the animation is full of personality and the vocal performances are great across the board. It’s not ground-breaking Dragon Ball and it’s light on action and plot but it’s a really fun episode that sets the stage nicely for an all-out brawl between Beerus and Earth’s Warriors next time.