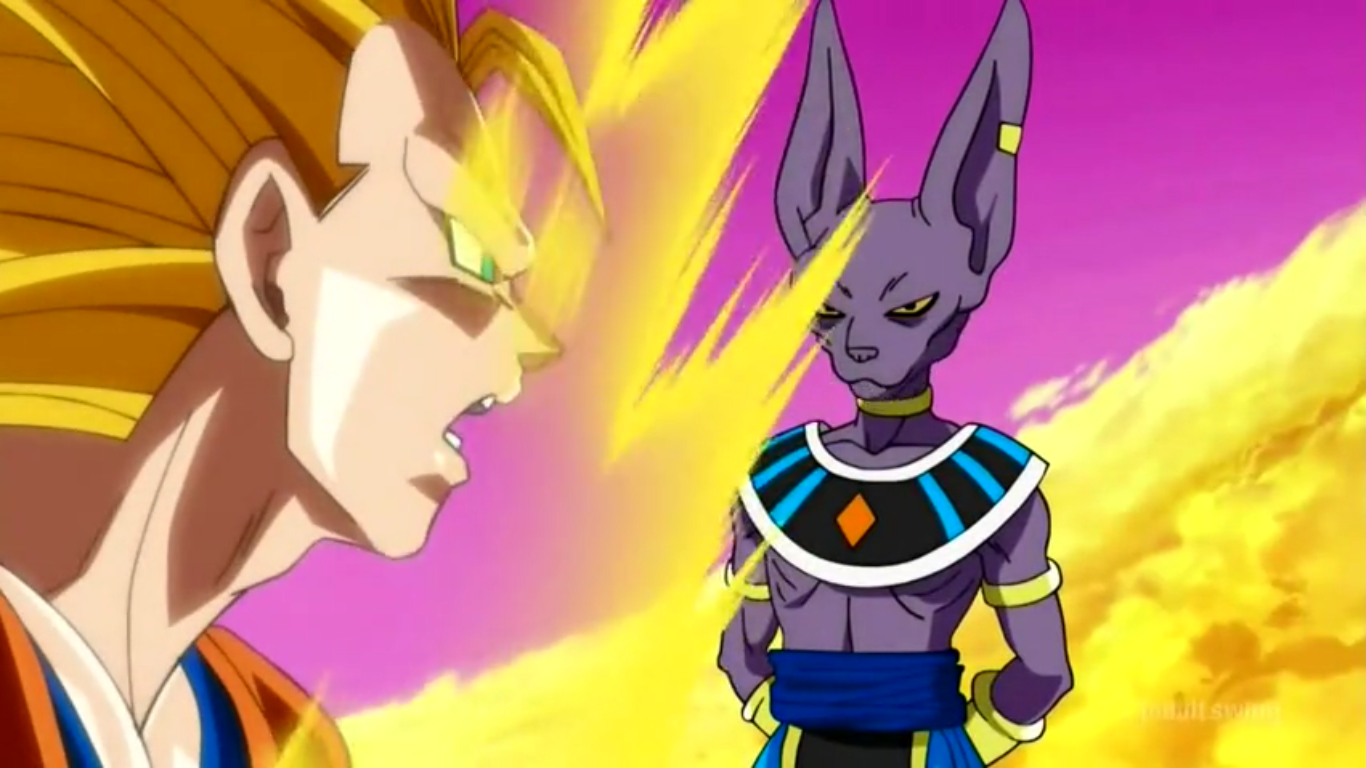 After last week’s filler-failure of an episode, Episode 5 of Dragon Ball Super feels like it’s back on track with the latest episode opening with the God of Destruction Beerus and his attendant Whis having arrived on King Kai’s planet in search of the “Super Saiyan God”. The opening few minutes provide more effective comic-relief than the entirety of last week’s episode as King Kai tries to act calm in the presense of a destroyer god and plays coy about Goku’s existence. We even get a nice bit of world-building with Beerus revealing that HE’S the reason King Kai’s planet is so small and he threatens to make it even smaller if King Kai can’t give him a good meal (a meal that Goku doubts exists otherwise he’d have “eaten it already”).

From a distance, Goku mistakes Whis for Beerus but it’s not long before Beerus reveals that he knows that Goku’s hiding away. Goku’s attempts at being “polite” are an early high-point as he has no idea how to address a deity but he’s of no interest to Beerus as he’s never heard of a “Super Saiyan God”. With this tiny planet being a dead-end, Beerus decides to travel to Earth to speak with Vegeta about his vision and promising not to destroy the planet as long as nothing there annoys him.

And if you’ve been on Planet Earth for the past few months, it’s safe to say that we’d be screwed if Beerus showed up right about now. 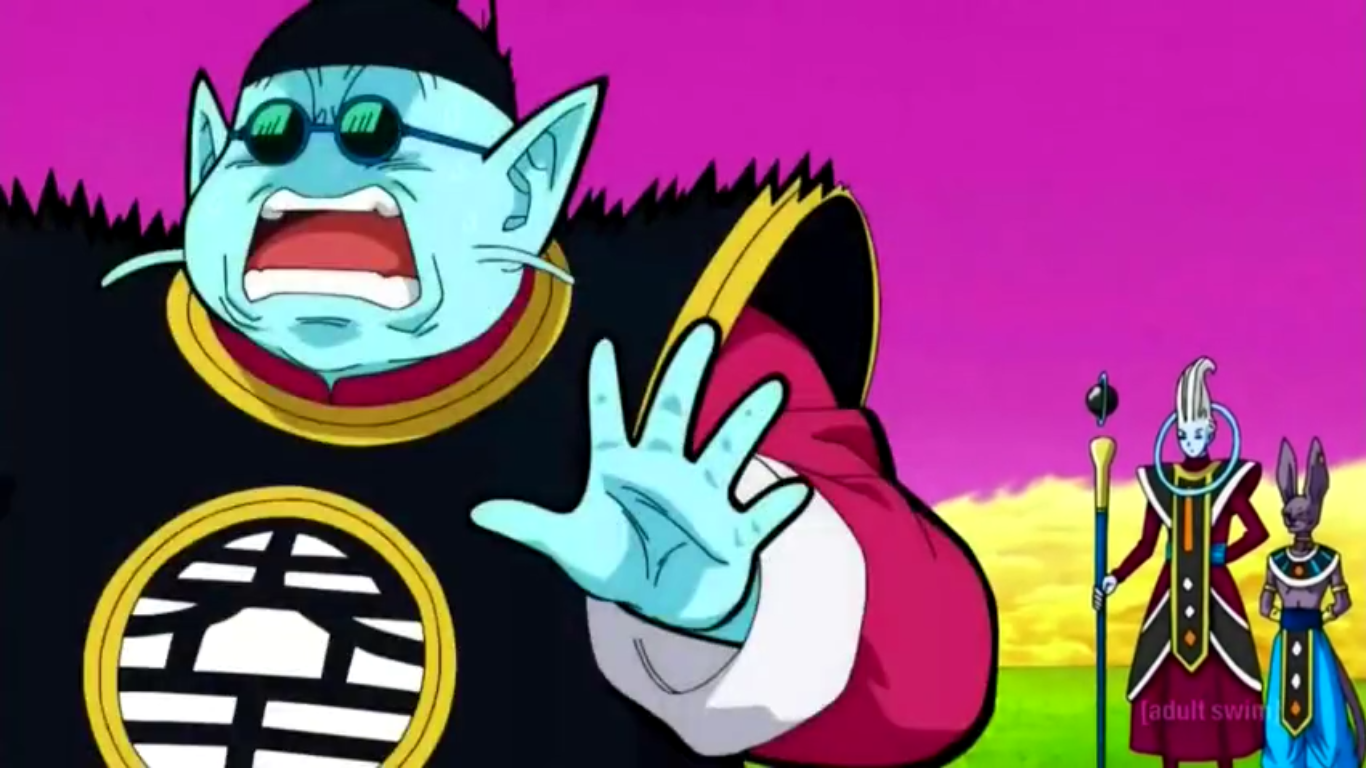 But before he goes, Goku asks Beerus if he’ll demonstrate his vast power in a sparring match and this is the feature presentation that fans have been waiting for. But Western viewers have also been trepidatious about this episode. Back when this episode first aired in Japan in August 2015 it was the subject of ridicule due to its generally horrible animation ranging to absent/awful facial expressions, jerky movements, a lack of impact, the list goes on. However, a few months later there would be a Dragon Ball Super Blu-Ray release which touched up the animation and made it much more watchable. Thankfully, the version that Western viewers got to see on their TV screens is the improved Blu-Ray version.

Now, the fight doesn’t hold a candle to the shorter version done in the Dragon Ball Z: Battle of Gods movie (which had a much bigger budget), but it’s a good crash-course in Goku’s Super Saiyan transformations as he slowly powers up throughout the episode in an attempt to test Beerus’ power. However, even at his maximum strength with Super Saiyan 3 (looking as ridiculous and as awesome as ever) he’s unable to land a single punch or kick. This episode does an effective job at establishing the new pecking order in the Universe. At Super Saiyan 3 Goku was able to fight evenly with Majin Buu at the end of Dragon Ball Z but now he’s nothing compared to Beerus. Beerus effortlessly manages to incapacitate Goku, leaving him unconscious in a crater resulting in the most embarrassing defeat of Goku’s life. 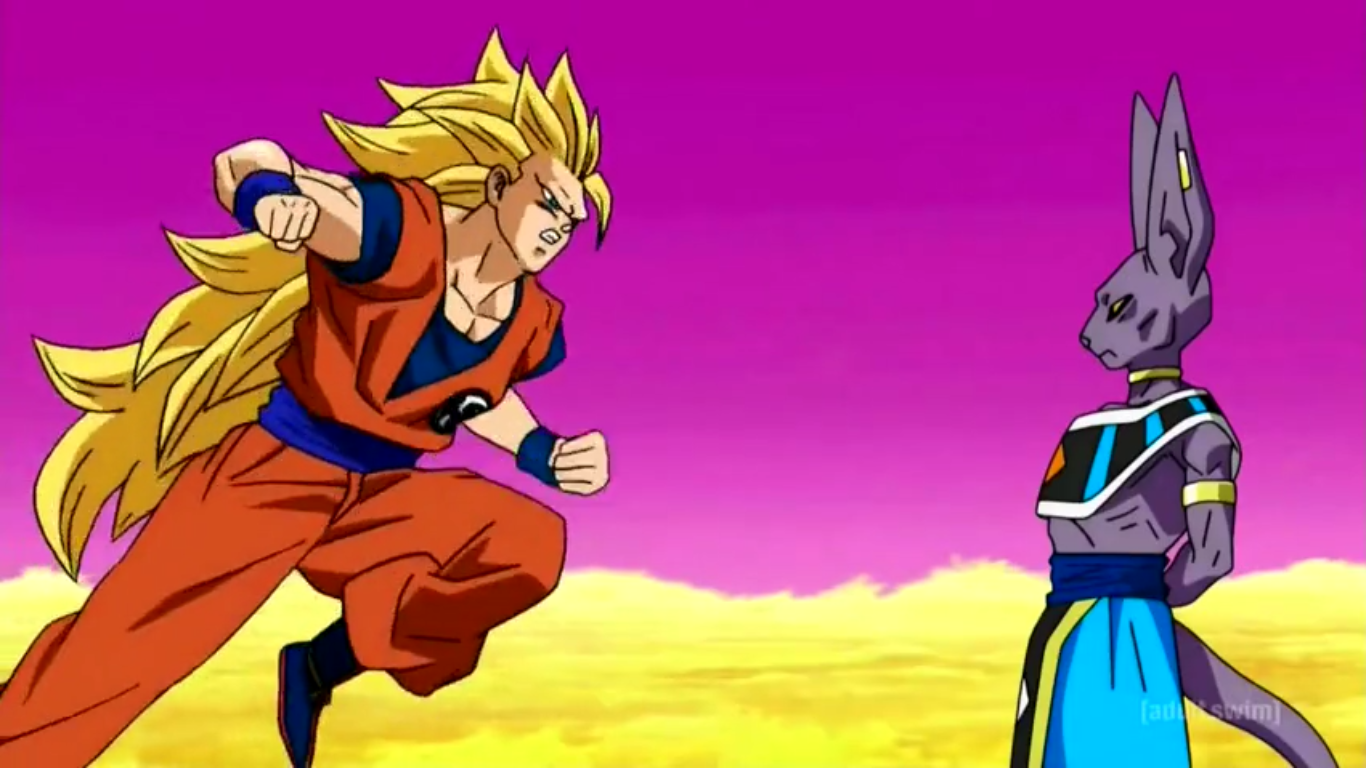 Despite the fighting, what actually shines throughout the episode is the characterisation of Beerus and a lot of that is owed to voice actor Jason Douglas. He’s powerful and threatening with full comprehension of the effect he has on people as a destroyer deity, but he seems to respect Goku’s audacity. Goku’s power is clearly a drop in a bucket compared to his, but he’s not malicious like Freiza, cocky like Cell or frenzied like Buu. He’s contemplative and he recognises the power that Goku has as a mortal whilst wanting to remind Goku of his newly discovered place at the bottom of the pecking order in this expanding universe. He taunts Goku early on in the fight, but only because he knows he’s capable of more and wants to see him go all-out.

But after knocking Goku out-cold, Beerus and Whis make their way to earth and King Kai warns Vegeta about the impending danger. Goku regains consciousness and starts coming up with a plan for a rematch and wondering if there’s a way to either find or become the “Super Saiyan God”.

Animation-wise, yes it’s an improvement on the initial Japanese broadcast a year and a half ago, but I’d be lying if I said this was a well-animated episode. The static conversations are fine and Goku as a Super Saiyan 3 still looks great but in terms of the fight itself there’s a lot of awkward moments, some goofy expressions and the frames that have Beerus and/or Goku at a distance don’t hold up under scrutiny. I don’t want to go too hard on the episode because deadlines are tight when working on anime, it’s a huge improvement over how it looked before and I’m sure the animators are finding their feet since we’re only 5 episodes in but…the fight scenes in Dragon Ball Z and Dragon Ball GT look better despite being made around 15-20 years ago. With a series like Dragon Ball Super, you’d expect Z or GT style animation at bare MINIMUM. It’s not terribly animated, but I think we really should be expecting better. 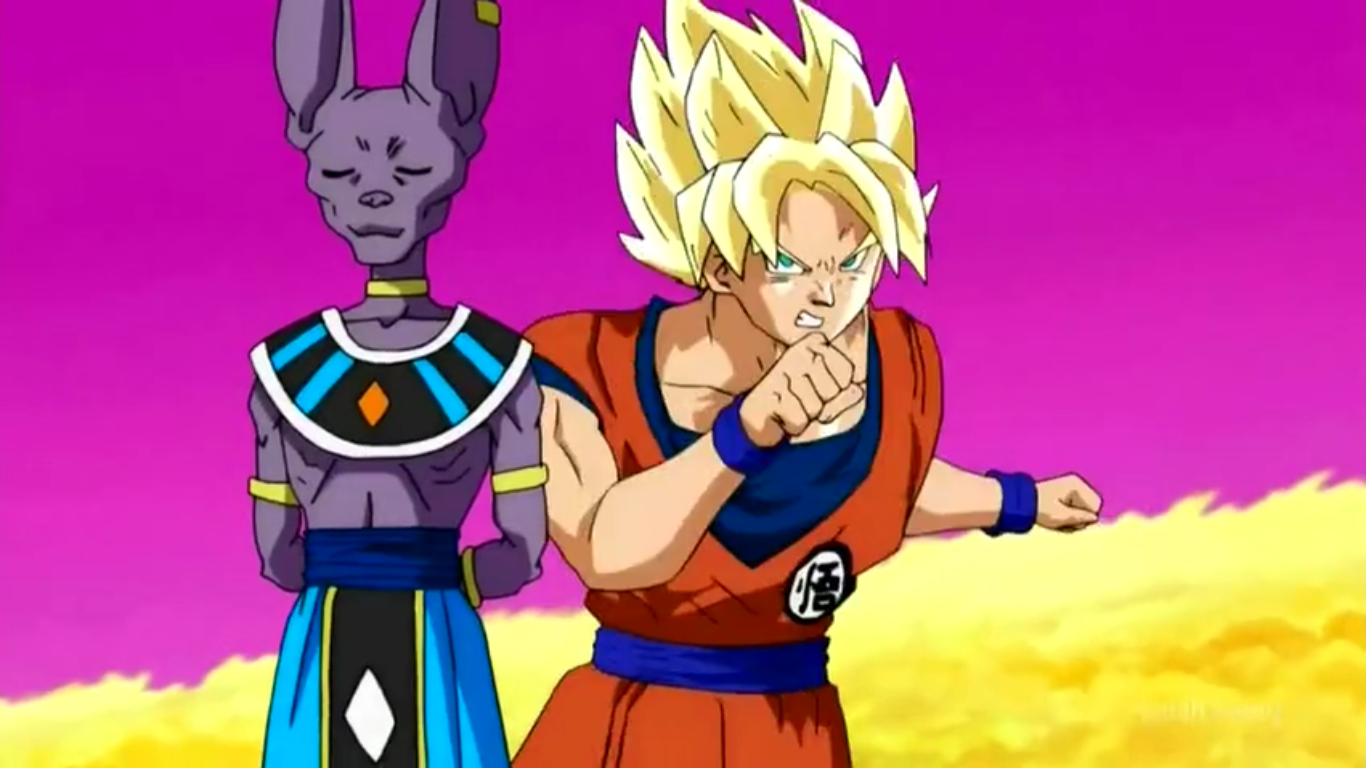 While the animation lets the episode down somewhat (though props must be give for improving it after the initial Japanese broadcast), this episode feels like what fans have been waiting for since Dragon Ball hit our screens again. Beerus proves himself to be a villain unlike anything this franchise has seen, we get some entertaining character beats and jokes with the promise of more engaging story to come in the near future. NOW it feels like Dragon Ball Super has really started and it feels good to have it on our screens.