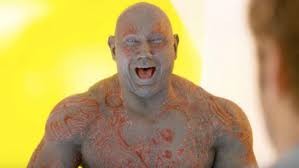 Without a doubt, Guardians of the Galaxy is one of Marvel’s most successful movie franchise in the last few years. The first two movies in the series earned almost $1.7 billion on a budget of less than $500 million. With that said, it isn’t surprising how a third movie has been commissioned. What is surprising is Disney’s decision to fire James Gunn, the director of both movies.

Disney fired James Gunn in July after an internet troll uncovered his earlier tweets joking about rape and pedophilia. Since then, Gunn’s Guardians of the Galaxy cast and crewmates have spoken out about what has happened with the production of the franchise.

Recently, Dave Bautista, the actor playing Drax, commented about the issue in his latest The Jonathan Ross Show appearance. During the interview, he lamented over what has happened to Gunn. He explains that he isn’t happy with Disney’s decision and if he was being incredibly honest, he doesn’t want to work with them any longer:

“Yeah, there’s a bit of an issue. It’s a bittersweet conversation. No, it’s a bitter-bitter conversation because I’m not really happy with what they’ve done with James Gunn. They’re putting the movie off – it’s on hold indefinitely – and, to be honest with you, I don’t know if I wanna work for Disney. You know, I’ve been very vocal about the way I feel, and I’m not afraid to admit how I feel.”

This is not the first time a Guardians of the Galaxy cast member decided to speak about their feelings about James Gunn’s firing. In July, Glenn Close, the actress who played Nova Prime, was cornered by TMZ and was asked about the issue. Close chose to be coy and spoke about the ills of being reckless on social media:

“I think it would help if people on social media could envision themselves actually standing across, or sitting across from the people they’re talking about. They might change what they put on social media.”

More recently, Chris Pratt aka Star Lord himself, explained his side on the issue. He revealed that everybody in the cast and crew was going through a hard time. He, himself, found it hard to enjoy Comic Con in the light of the heavy news:

“I was a little shocked, like everybody. And it was crazy timing, with Comic-Con. … I love going to Comic-Con, but I ended up not doing a lot of interviews around that time, just because it was so shocking.”

In the aftermath of the discovery, Gunn accepted Disney’s decision in a tearful press released on Twitter. In the series of tweets, the director admitted to his faults and apologized to everyone he has offended:

“In the past, I have apologized for humor of mine that hurt people. I truly felt sorry and meant every word of my apologies. For the record, when I made these shocking jokes, I wasn’t living them out. I know this is a weird statement to make, and seems obvious, but, still, here I am, saying it. Anyway, that’s the completely honest truth: I used to make a lot of offensive jokes. I don’t anymore. I don’t blame my past self for this, but I like myself more and feel like a more full human being and creator today. Love you to you all” read a part of Gunn’s apology.