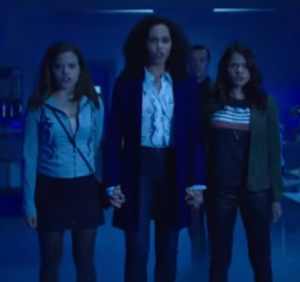 The reboot of the The WB ‘s original series, Charmed, is scheduled to debut in a little more than a month. Naturally, more and more details about the upcoming premiere have surfaced.

In a recent interview with Variety, executive producer of the series, Amy Rardin, revealed that new and improved Charmed would be heavily influenced by Latinx witchcraft lore. She explains that in developing the show the production realized that there is more to witchcraft that the Salem trials. They found it their duty to explore the possibilities:

“We have a real Latinx witch in our writers’ room. Every culture has their own witchcraft traditions, and we really wanted to explore not just from a Salem witchcraft but all kinds of different witchcraft that happens all around the world.”

The decision to include witchcraft from around the role does sound a bit controversial. However, this isn’t new. Early in the project, the reboot experienced backlash from the original members of the cast.

Holly Marie Combs, the actress who played Piper in the original series, felt like the reboot was claiming to be a better, more progressive version of the franchise. While times have had changed, Combs felt like it would have been better if the reboot honored the original show:

“Let me say first that I appreciate the jobs and opportunities the Charmed reboot created. But I will never understand what is fierce, funny or feminist in creating a show that basically says the original actresses are too old to do a job they did 12 years ago. I hope the new show is far better than the marketing so the true legacy does remain. Reboots fair better when they honor the original as opposed to taking shots at the original.”

Likewise, Shannen Doherty, who starred in the series for one season, chimed in the issue. Initially, she felt like the marketing campaign for the new Charmed series could have been better. More recently, Doherty has expressed her support for the show. She gushed about how the series would be focusing on strong women like the original did. She is hopeful, that even with the backlash, the fans of the original Charmed would support the new series:

“I think it’s great. I think it’s awesome. I think second lives are amazing, so I’m all for it… I’m happy to see that a show, that back then was all about strong women who supported and loved each other, is now coming back again in this day and age. It’s about female empowerment again — not that that’s something new. Charmed originally was that too. But I think it’s wonderful, you know? And it’s providing a lot of jobs for people, and I honestly, I just wish them well. And I hope that everyone just gives them a chance” explained Doherty during the Stand Up to Cancer telecast as reported by ET Online.