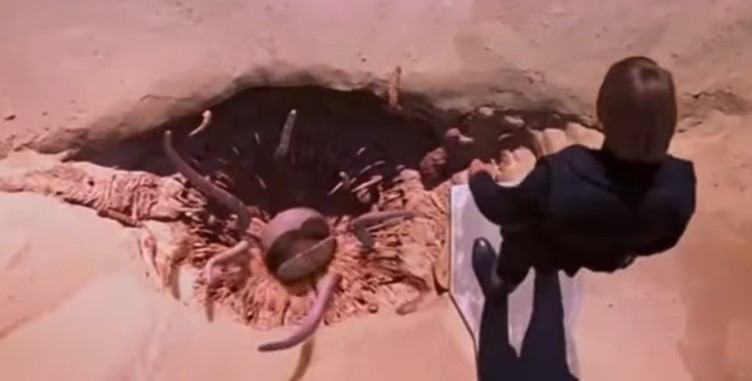 Originally in Return of the Jedi, the Sarlacc Pit (a.k.a. the Pit of Carkoon) was just a hole in the sand that Jabba the Hutt would place his prisoners in. When it came to the special edition, the pit was given a beak and tentacles to make it look a lot more menacing. You can watch the comparison here.

With the latest episode of TBOBF, however, we get the original “butthole” Sarlacc; and it’s revealed that the beak can actually retract into the pit and come out when it chooses to. This way, the Sarlacc in the original version of the films can be considered canon at the same time as the “beak” Sarlacc in the special editions.

It’s just a little Easter Egg that a lot of older Star Wars fans would have noticed. The entire time I thought they ret-conned the special edition Sarlacc, but they just found a way to actually make it even scarier; so kudos to Jon Favreau and his team for that.

With Boba being “fully healed” in the episode, we should expect no more flashbacks moving forward. Admittedly the series has been a bit of a mixed bag, but hopefully we can get the story moving forward by the next chapter.

Catch new episodes of The Book of Boba Fett Wednesdays on Disney+.