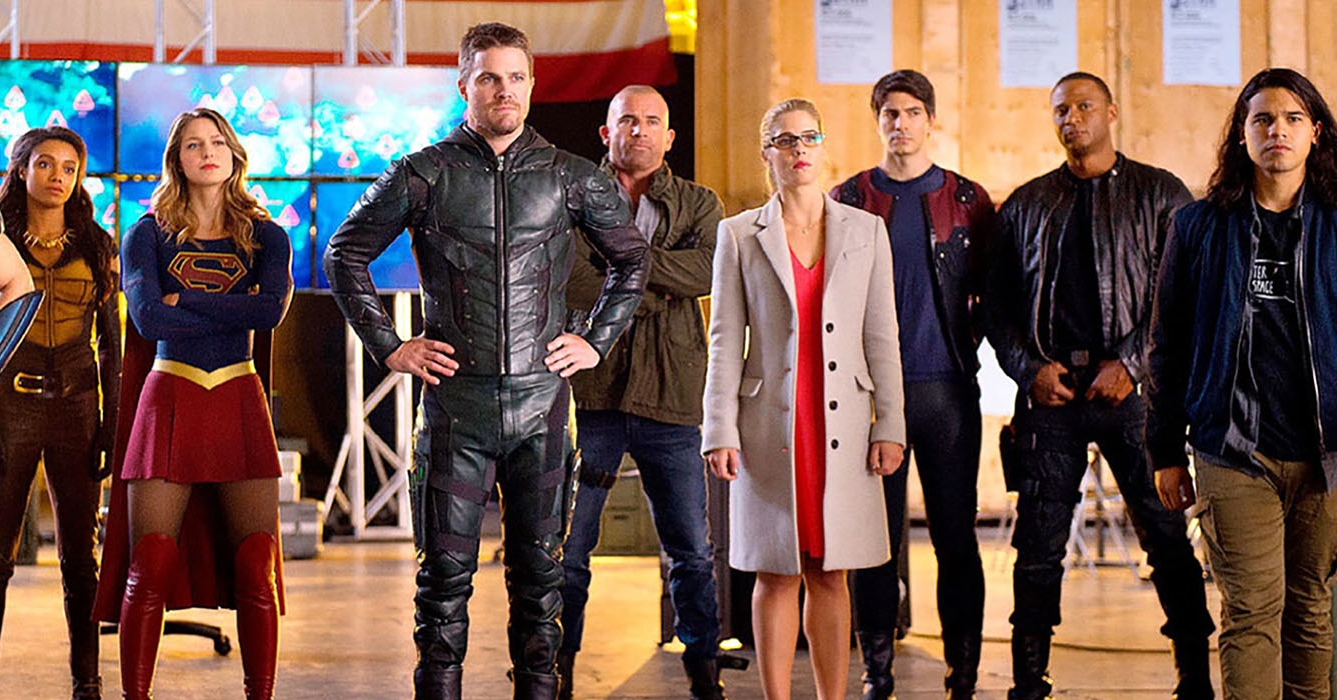 With just under to weeks to go until the Invasion! crossovers begin airing, The CW has released synopses for parts two through four. Thankfully, they each offer a little more insight in regards to the way the story will unfold. The Flash will kick off the crossover proper, you can read its synopsis below.

IT’S HEROES VS. ALIENS IN THIS EPIC CROSSOVER EVENT — When aliens called the Dominators attack Central City, Barry (Grant Gustin) speeds over to Star City to ask the Green Arrow (guest star Stephen Amell) for help in stopping them. Realizing the battle against the Dominators is bigger than they thought, they track down the Legends of Tomorrow, and Barry and Cisco (Carlos Valdes) create a breach to bring back a secret weapon – Supergirl (guest star Melissa Benoist). Once all of the super friends are assembled, they come up with a plan to attack but a shocking secret related to Flashpoint is revealed and suddenly no one is sure who they can trust. Meanwhile, Wally (Keiynan Lonsdale) wants to join the battle against the aliens but Iris (Candice Patton) tells him he’s not ready. Dermott Downs directed the episode with story by Greg Berlanti & Andrew Kreisberg and teleplay by Aaron Helbing & Todd Helbing (#308). Original airdate 11/29/2016.

The next part of the Dominator’s invasion will move over into Arrow’s 100th episode. It’ll mark a benchmark for the show, and as the synopsis teases, everyone is returning for the occasion.

ARROW CELEBRATES 100 EPISODES; THE EPIC SUPERHERO CROSSOVER CONTINUES — Oliver (Stephen Amell) wakes up to a life where he never got on The Queen’s Gambit. Robert (guest star Jamey Sheridan) and Moira Queen (guest star Susanna Thompson) are alive and well. Laurel (guest star Katie Cassidy) is his loving fiancée and their wedding is imminent. Everything seems perfect, but Oliver starts to notice small imperfections that make him question this new reality. Meanwhile, Felicity (Emily Bett Rickards) and the recruits take on a new threat with help from The Flash (guest star Grant Gustin) and Supergirl (guest star Melissa Benoist). James Bamford directed the episode with story by Greg Berlanti and written by Marc Guggenheim & Wendy Mericle (#508). Original airdate 11/30/2016.

Finally, Legends of Tomorrow will deliver a resolution to the crossover.

ALL FOR ONE AND ONE FOR ALL IN THIS CROSSOVER OF SUPERHEROS — After learning the Dominators’ plan for the world, the Legends must work together with The Flash (guest star Grant Gustin), Supergirl (guest star Melissa Benoist) and Green Arrow (guest star Stephen Amell) to kill them once and for all. Meanwhile, Stein (Victor Garber) figures out, with the help of others, how the team can terminate the Dominators, but is distracted by the aberration he realizes he created in 1987. Brandon Routh, Franz Drameh, Dominic Purcell, Maisie Richardson-Sellers, Nick Zano and Caity Lotz also star. Gregory Smith directed the episode written by Phil Klemmer & Marc Guggenheim (#207).

Let’s unpack all of this, shall we? First, we have to acknowledge the awesomeness that is the steady “Super Friends” mentions. Winn and James joked about being Super Friends in the most recent episode of Supergirl. Now, this synopsis for The Flash is calling all the Super Friends together. The surprise will likely be left to how the Dominators land, and their establishing a purpose for the invasion.

The Arrow synopsis is especially interesting. We know, stop the Amell-Arrow/Batman comparisons, but you can’t deny this sounds similar to the Perchance to Dream episode of Batman: The Animated Series. Maybe Ollie will notice his in a dream state whilst reading a book, because the words appear upside down. In all seriousness, it’s possible the Dominators are behind Mr. Queen’s dream of a perfect family and impending wedding. For this iteration of the aliens, they are confirmed to be mind-controlling.

The Legends episode looks like it’ll also push forward a plot point from the previous 1980s arc. What aberration did Stein create? Could it have something to do with his wife, Clarissa, or does it impact the world over? We’ll know pretty soon.

Supergirl will get things going for the Invasion! crossover starting November 28.

Images: The CW via Entertainment Weekly