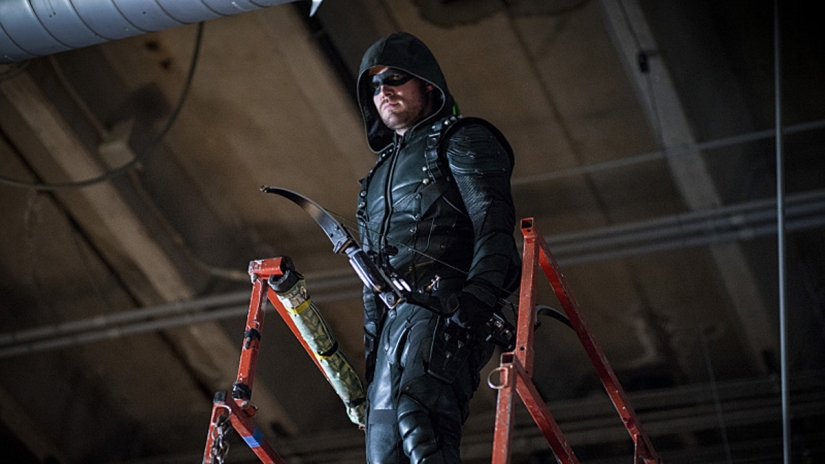 With the crossover episodes complete, it’s time for The Flash, Arrow, and Legends to finish up the first half of this season. The Flash will get help from Jay Garrick to confront Savitar, and Legends of Tomorrow will see the Legion of Doom officially assemble. On the Arrow side of things, many of the troubles from past episodes will also come to a head. Fans are especially looking forward to seeing Prometheus and Green Arrow stand-off.

In an interview with Entertainment Weekly, EP Marc Guggenheim wasn’t ready to reveal if the villain will be unmasked. We certainly don’t expect that to be the case. However, he did tease that Arrow’s latest big bad will definitely “make an appearance.” Discussing the dramatic irony surrounding Artemis’ betrayal, Guggenheim added that: “We know from the end of episode 507 that Evelyn is working with Prometheus. We get a very quick payoff to the cliffhanger of 507.” Hopefully, it won’t be too quick of a payoff; there are tons of questions in desperate need of answering. But, of course, it’s possible her arc will continue into the back half of Season 5.

EP Greg Berlanti also had something to say about Season 5’s impending ninth episode: “There’s a shocking end of the winter [finale] moment for Oliver.” Could this shock potentially tie into whether or not Prometheus will be unmasked? Or has it nothing to do with Oliver Queen’s nighttime adventures? If not, the moment may be even more impactful than expected.

Check out the synopsis for the Season 5 winter finale below:

“PROMETHEOUS MAKES A DEADLY MOVE AGAINST OLIVER AND THE TEAM — After Prometheus attacks Curtis, Oliver realizes Prometheus knows all of Team Arrow’s secret identities and is planning to come for them one by one. Felicity and Detective Malone discover a clue that links Prometheus to Oliver’s past. Antonio Negret directed the episode written by Wendy Mericle & Beth Schwartz (#509). Original airdate 12/7/2016.”