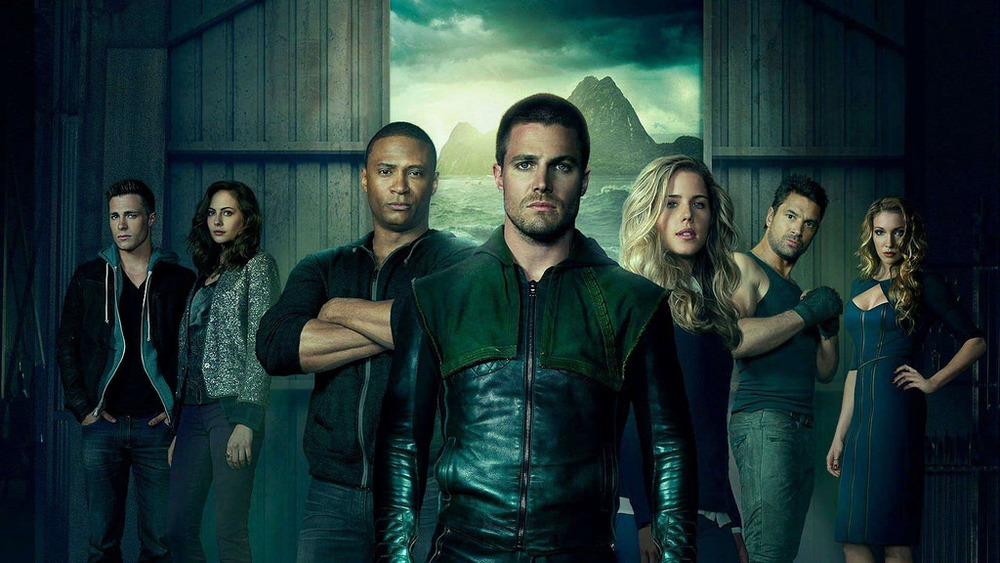 For the past five years, Arrow has remained a comic book television staple. Yes, it’s had its share of ups and downs — many of the ups in Seasons 1 and 2 with Seasons 3 and 4 rounding out the downs. However, thus far, Season 5 has set a course in the right direction, returning the show to its grounded roots. Its latest episode, a part of the Invasion! event, marked the 100th hour. And due to the nature of the crossover, the grounded focus takes to the sidelines for a bit. Despite the crossover, it still feels like an episode of Arrow. More importantly, it feels like the Arrow long-time fans fondly remember. As a forewarning, mild spoilers will follow.

Oliver, Sara, Ray, Diggle, and Thea were all abducted at the end of The Flash’s episode. Arrow picks up not long after, but we aren’t in real world Star City. Our heroes, unconscious aboard a Dominator ship, are in a shared dream state. Ollie and Laurel are a day away from their wedding, Sara’s coming to town for the occasion, Ray is in talks to buy Queen Consolidated, Diggle’s the Hood/Arrow, and Thea is… happily being Thea. Moira and Robert Queen are both alive and well in this dream state, and all seems good. Except that it isn’t. 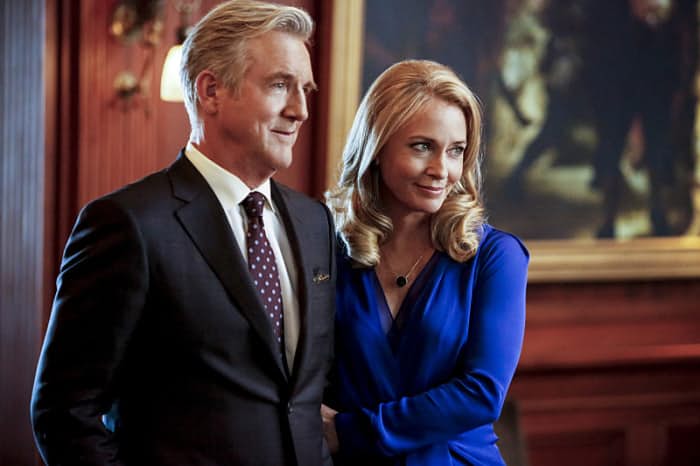 While the non-metas are off in a Dominator-induced La La Land, the ground team is hard at work to locate them. Cisco meets Team Arrow 2.0 for the first time, working with them to discern how best to track down Oliver and Co. Truthfully, these story beats are probably the least fulfilling. They inch the over-arching narrative along, but the thrill of the crossover doesn’t carry over as nicely from The Flash’s part. Flash and Supergirl show up to help track down technology to give the home team an advantage, but their appearances are short-lived. However, the brightest spot comes from the Girl of Steel and the Scarlett Speedster’s warehouse tag team. Chris Evans’ Captain America would be impressed with their teamwork. Thankfully, Cisco and Team Arrow are able to track the location of the Dominator ship. But their discovery will do them no good if the non-meta squad can’t help themselves first.

What brings the five heroes out of their reverie are flashes of memories. As they float in and out of awareness, fans of the show are treated to some pretty neat call backs and quite a few nice touches. Laurel and Ollie’s love is beautifully depicted, arguably for the first time. It’s no Black Canary and Green Arrow arc, but their connection here is the closest we’ll probably ever get on the show.

Other touching moments worth noting are the scenes with Thea and Moira. When the Queen family matriarch was murdered by Slade, her and Thea weren’t on the best of terms. Their small talk and endearing embrace, though false, will likely provide Speedy some semblance of closure. 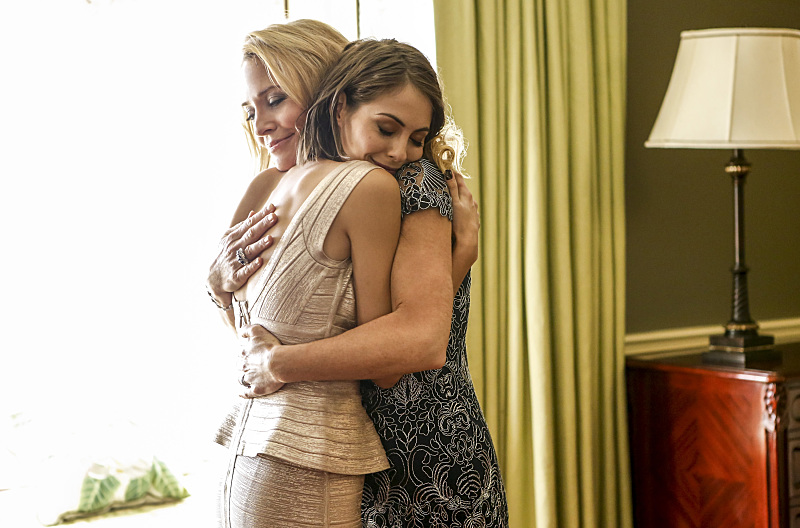 The memory flashes are also great, as they pull scenes directly from Seasons 1 and 2. But most exciting is the way the Dominators’ hallucination fights back against the heroes’ growing awareness. Deathstroke shows up, culminating in a Diggle, Ollie, and Sara fight to make Season 2 ridiculously proud. However, the sadness sets in when he’s only there to fight and nothing more — meaning Manu Bennett was likely not under the mask.

As the five make their way to exiting the shared dream world, other defense mechanisms pop into place. Sara fights Darhk, Thea takes on Merlyn/Dark Archer, Ollie dukes it out with Deathstroke, and Dig and Ray are left to take on mirakuru soldiers. It’s wonderful. Most wonderful of all, is James Bamford’s direction. The stunt coordinator/director has shot and coordinated some of the series’ most visceral fight scenes and episode 100 is no exception. During the aforementioned last battle, teamwork comes heavily into play as Thea drives a sword through Merlyn, takes his bow, steals an arrow from his quiver, shoots it at Sara who then catches said arrow and drives it through Damien Darhk. Those few seconds alone warrant a re-watch.

What this episode does especially well is allow for plenty of closure. We knew it was coming, but watching it in action was heartwarming. Again, Thea and Oliver are able to say one last goodbye to their parents, Sara spends a few extra moments with Laurel, and Ollie’s parting with Laurel gives him the opportunity to say the things he was never able to convey. 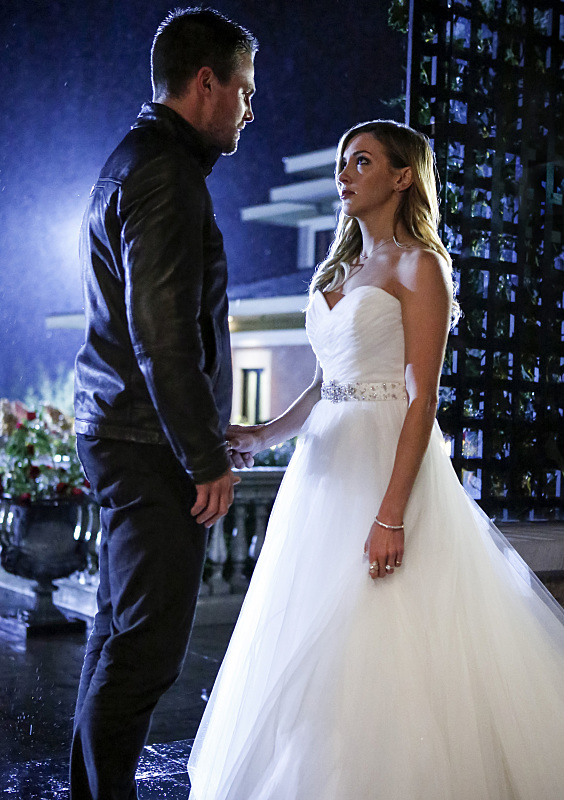 Just for fun, there are a few other things to note. One being Colin Donnell’s recent tease that Tommy would return, but not return. Well, he did — twice. During the dream state, Malcolm tells Thea that Tommy is hard at work as a physician in Chicago. It’s a nice nod to Donnell’s role on Chicago MD. He, Roy, and a few others also appear in call backs to the first couple of seasons, as Oliver exits the dream world. Again, not the same as the real thing, but pretty cool and these moments too offer Ollie a bit of closure. It’s closure for the audience also, as the show has changed over the years. Arrow has grown, hit snags, and Season 5 is returning it to form; with that in mind, it was nice taking a beautiful walk down memory lane.

The Invasion! crossover continues and concludes Thursday, December 1 on Legends of Tomorrow.

A Spirited Walk Down Memory Lane

Arrow’s 100th episode coincides with the Invasion! crossover, but the show’s milestone is serviced wonderfully. Unfortunately, the crossover aspect takes a bit of a backseat. However, the closure provided to the characters and the audience makes up for it in beautiful fashion.