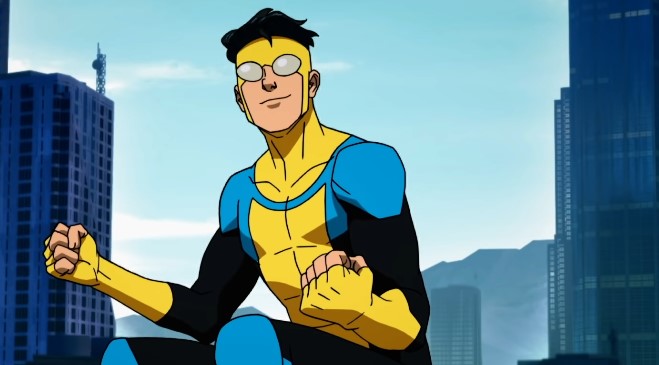 After the success of The Boys, Amazon Prime Video is looking to expand on their superhero IP with Robert Kirkman’s Invincible. The show is set to hit the streaming platform this March, and we have a new clip featuring our hero Mark Grayson (Steven Yeun) and Omni-Man (J.K. Simmons).

Watch this clip for Invincible:

INVINCIBLE is an Amazon Original series based on the groundbreaking comic book from Robert Kirkman, the creator of The Walking Dead. The story revolves around 17-year-old Mark Grayson (Steven Yeun), who’s just like every other guy his age — except his father is the most powerful superhero on the planet, Omni-Man (J.K. Simmons). In this extended first clip, Mark chats with his father about his developing powers.

Besides Invincible and Omni-Man, we also have a small clip of Art Rosebaum who is voiced by Mark Hamill. In the comics, Art serves as the Edna Mode of this universe and designs costumes for the heroes. Other voices you should watch out for in the show include Sandra Oh, Seth Rogen, Zazie Beetz, Walton Goggins, Gillian Jacobs, and Jason Matzoukas.

While the Invincible clip shared may be very wholesome as expected of the superhero genre, the previous trailer should already prepare audiences for some more gore and blood. While superheroes may be all the rage now, there is a rising sub-genre which looks to delve into the darker realities of having superheroes and the violence that could result in their existence.

Hopefully Invicible will keep fans of The Boys satiated until the third season comes along.

Catch Invicible when it premieres on Amazon Prime Video on March 26.